Hundreds of Catholics have flocked to a small town in northern Israel to view a statue of the Virgin Mary that residents say "weeps" oil.... 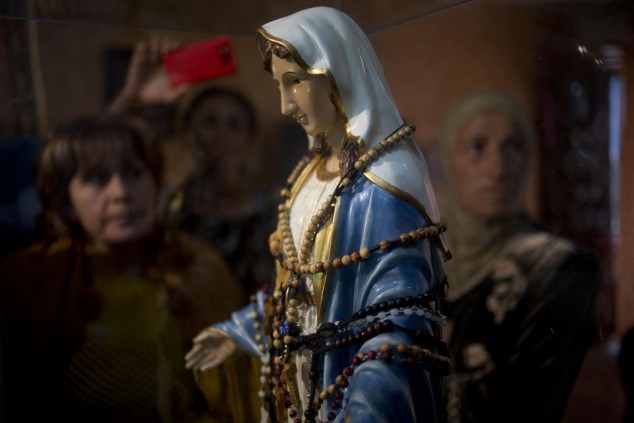 The Catholic practice of goddess worship dates back to ancient Babylon where, after the death of Nimrod, his wife Semiramis gave birth to a son named Tammuz whom she said was Nimrod reincarnated. Semiramis claimed that she had conceived supernaturally, and that the offspring was of divine origin. When the Catholic system was created in 325AD, Constantine incorporated this pagan practice into his Catholic/Christian hybrid church. This began the period of history known as the Dark Ages. The true Christian church freed itself from it’s enslavement during the Reformation.

The Catholic church remains in the dark to this day, as the following story shows:

JERUSALEM (AP) — Hundreds of people have flocked to a small town in northern Israel to view a statue of the Virgin Mary that residents say “weeps”oil.

Members of a Christian family from Tarshiha, near the Lebanon border, say they have witnessed a miracle in their living room.

Osama Khoury said Tuesday that his wife Amira found the statue “covered with oil” recently. Amira said the statue “spoke to her” and told her not to be afraid. After a neighbor witnessed the oil, word soon spread.

Parts of the statue appear to be slick with moisture, even after it is wiped off.

The family says it is most striking when a “tear” seems to roll down the statue’s cheek. It says some 2,000 people have come to see the statue over the last week. source – Israel & Stuff