Is the Catholic Church getting ready to forge a military alliance with Islam to create the prophesied One World Religion? We think they are...... 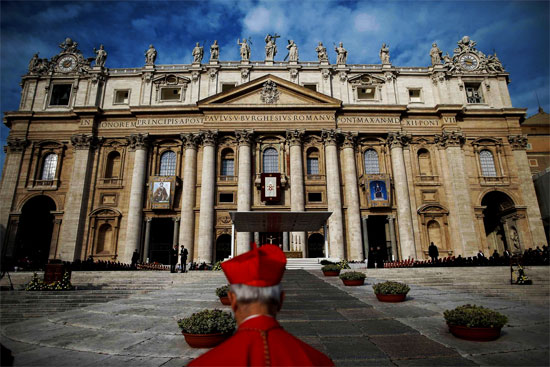 Reuters/REUTERS - A cardinal arrives to attend a mass celebrated by Pope Benedict XVI marking the opening of the Synod of bishops in St. Peter's square at the Vatican October 7, 2012. REUTERS/Tony Gentile
by Geoffrey Grider October 16, 2012
NOW THE END BEGINS SHARE:

The coming One World Religion

The bible teaches that, during the time of the Great Tribulation, there will be a One World Government headed up by the Antichrist, and that he will also be the object of worship of the One World Religion that will also be set up. The last time that the Vatican was in world power was during the time of the Spanish Inquisition. This was a time of great persecution of bible believing Christians by the Catholic Church, with the killings and the slaughter carried out by Rome’s alliance with Spain. We believe that during the Great Tribulation, the Vatican in Rome will form an alliance with Islam, and the killings and slaughtering of bible believing Christians will once again be carried out.

Live Broadcast 10.21.12 On NTEB Radio: The Coming Alliance Between The Vatican, Islam And Mormonism

With that in mind, please note the story below. The Vatican has just realized how huge the world’s Muslim population is, and we say that according the bible, Rome will soon form an alliance with Islam and bring them in as their “muscle”. Once this happens, the Vatican will once again become a world theocratic power and will fulfill the prophecies about the Catholic church found in chapters 17 and 18 of the book of Revelation.

From Yahoo News: VATICAN CITY (Reuters) – A Roman Catholic cardinal has caused an uproar at the Vatican by screening a spurious YouTube video that makes alarmist predictions about the growth of Islam in Europe. 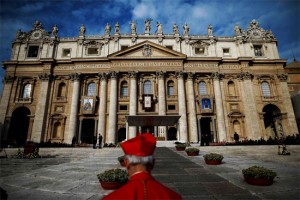 Reuters/REUTERS – A cardinal arrives to attend a mass celebrated by Pope Benedict XVI marking the opening of the Synod of bishops in St. Peter’s square at the Vatican October 7, 2012. REUTERS/Tony Gentile

The seven-minute clip, called “Muslim Demographics,” was the talk of an international gathering of bishops on Monday, two days after Cardinal Peter Turkson screened it during a free discussion period.

Turkson, a Ghanaian who is based in the Vatican and is president of its Council for Justice and Peace, sparked consternation among his fellow bishops over the clip.

“As we were arriving this morning I was asked several times ‘Who planned it? Whose was it? Who is behind it?” Father Thomas Rosica said at a briefing for journalists, who are not allowed to attend the synod sessions, the first since the screening.

He said the clip had sparked “the most animated” discussion so far at the three-week conference, and one bishop said he would rebut Turkson by presenting a report with contrary data.

The clip has brought Islam to the top of the agenda at the synod, attended by 262 bishops. “Islam is the buzzword,” Rosica said.

Turkson could not be reached for comment on why he chose to screen the video during the Vatican meeting, where the bishops are discussing ways of winning back lapsed Roman Catholics in developed countries.

The clip, which has been viewed over 13 million times on YouTube since it was uploaded by an anonymous user in 2009, combines dramatic music with skewed population statistics to make claims about various European countries such as “In just 39 years France will be an Islamic republic.”

Critics have pointed out that the fertility figures used in the video, which claim French women have an average of 1.8 children while French Muslim women have 8.1 children, cannot be genuine as France does not collect statistics by religion.

According to a study by the U.S.-based Pew Research Center there were 2.18 billion Christians in 2010, half of which were Catholics. The total number of Muslims of all denominations was 1.6 billion and forecast to increase 35 percent to 2.2 billion by 2030, according to the research group.

The Holy See’s relations with Islam have not always been smooth. In 2006 Pope Benedict gave a speech in Regensburg which was perceived by some Muslims as an attack on Islam.

“It’s our shared responsibility as brothers and believers in the same holy God,” he said.

Asked about his reaction to the cardinal showing the video at the Vatican, Yahya Pallavicini, vice president of the Islamic Religious Community of Italy, warned against a numbers war based on scare tactics by any side.

“I think that we should focus, Muslims and Christians, on our common challenges, rather than challenging each other in scary attitudes on who is going to increase or decrease in numbers,” Pallavicini told Reuters. source – Yahoo News