MEMO TO GAVIN NEWSOM: Stop spending all your money on illegal immigrants, and start taking care of the needs of your state and the American citizens that live there. Most of all, quit your pusillanimous blaming of 'climate change' as the cause of the wild fires, when the reality is they are caused largely by the sheer incompetence and neglect of your administration. Let's leave aside the Liberal hysterics of the pagan, Gaia religion of climate change and take a peek into where the money is currently spent in sanctuary city California, shall we?

As of 2018, the number of dead and uncleared trees in California forest lands exceeded 120,000,000, and that amounts to an incredible amount of kindling to accelerate forest fires. They have no money left to maintain forests after spending $23 billion caring for illegal immigrants.

Far Left Liberal Progressive governor of California, Gavin Newsom, got in front of the cameras yesterday and made a ‘very serious’ statement about the raging wildfires currently plaguing their state. He said ““The debate is over around climate change. Just come to the state of California, observe it with your own eyes,” a grinning Newsom told reporters while touring the fire-ravaged North Complex near Oroville. “It’s not an intellectual debate, it’s not even debatable.” Absolute rubbish, to say the least. Let’s begin a real debate, shall we?

“But the day of the Lord will come as a thief in the night; in the which the heavens shall pass away with a great noise, and the elements shall melt with fervent heat, the earth also and the works that are therein shall be burned up.” 2 Peter 3:10 (KJB)

YES, OUR GLOBAL CLIMATE IS CHANGING RAPIDLY, AND NO, THERE IS NOTHING YOU CAN DO ABOUT IT AND THERE IS NO POWER ON EARTH THAT CAN STOP IT

Always makes me laugh, seeing as most Liberals are either atheist or agnostic, that they are such die-hard, true believers in thier own religion of Climate Change. And woe be to the infidel who dares to say the emperor has no clothes, or in this case, the governor of California. Let’s leave aside the Liberal hysterics of the pagan, Gaia religion of climate change and take a peek into where the money is currently spent in sanctuary city California: 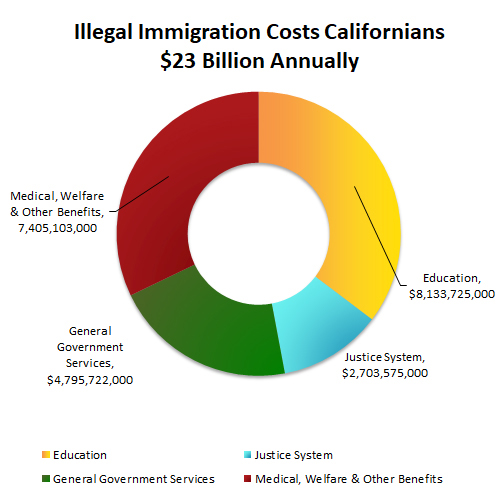 It’s so much easier to blame the imaginary scapegoat of ‘global warming’ and ‘climate change’ for the wild fires in California, instead of looking to the incredible mismanagement of the California forest and park lands. California is a sanctuary state, and as such spends over $23 billion each year on the staggering costs associated with caring for illegal immigrants and their children.

CA Gov. Gavin Newsom: “The debate is OVER around climate change.” pic.twitter.com/ATFQQWOpsa

According to the California Policy Center, the Golden State’s total state/county/municipal debt tops a staggering $1.3 trillion.[1] Meanwhile, as the state teeters on the brink of economic collapse, its civic and political leaders relentlessly advance laws and policies that attract and reward illegal immigration. And, all the while, they ignore the simple fact that cooperating with the federal government in its efforts to suppress illegal immigration would decrease the massive cost imposed on taxpaying citizens and legal immigrants living in California. READ MORE

When you are spending that much money to care for illegal immigrants, guess what you don’t have money for? Taking care of the forest lands that require constant care, and California no longer has the money to do that. As of 2018, the number of dead and uncleared trees in California forest lands exceeded 120,000,000, and that amounts to an incredible amount of kindling to accelerate forest fires. 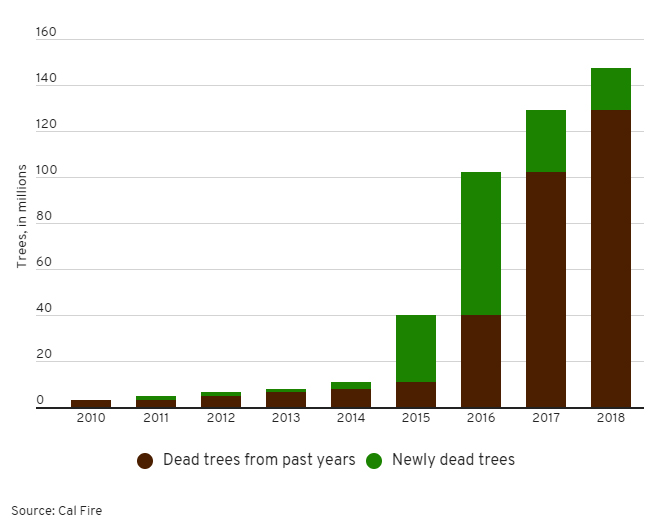 California’s ubiquitous pines and oaks are vulnerable to insect infestation and disease. Those giants crash to the forest floor and, unless they are removed, provide ready fodder for the next voracious fire. The die-off is catastrophic, beyond the reach of state foresters to remedy. In many communities of the central and southern Sierra Nevada mountain range, “80 percent of trees are dead,” said Ken Pimlott, former director of Cal Fire.

MEMO TO GAVIN NEWSOM: Stop spending all your money on illegal immigrants, and start taking care of the needs of your state and the American citizens that live there. Most of all, quit your pusillanimous blaming of ‘climate change’ as the cause of the wild fires, when the reality is they are caused largely by the sheer incompetence and neglect of your administration.