The art theme this year is ‘Cult Cargo’ and focuses on a strange being called John Frum. 'He is known to us by many names, this Visitor from Elsewhere,... 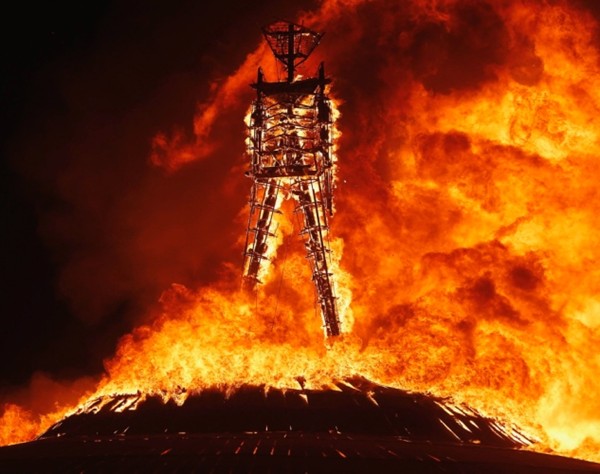 “Then said I unto them, Cast ye away every man the abominations of his eyes, and defile not yourselves with the idols of Egypt: I am the LORD your God.” Ezekiel 20:7

The adherents to this religion are appropriately called “burners”, and the Burning Man Pagan Festival began like this:

“Burning Man stems from a small group of free-spirited artists in the San Francisco area who got together to burn a wooden effigy on the beach in 1986; and the little beach event has grown to an annual gathering of nearly 70,000 attendees and has moved to the Black Rock Desert of Nevada, where hippies, yuppies and wannabe bohemians of every type meet up and enjoy a week of crazy self-expression, self-reliance and communal craziness.” source – Explorer News 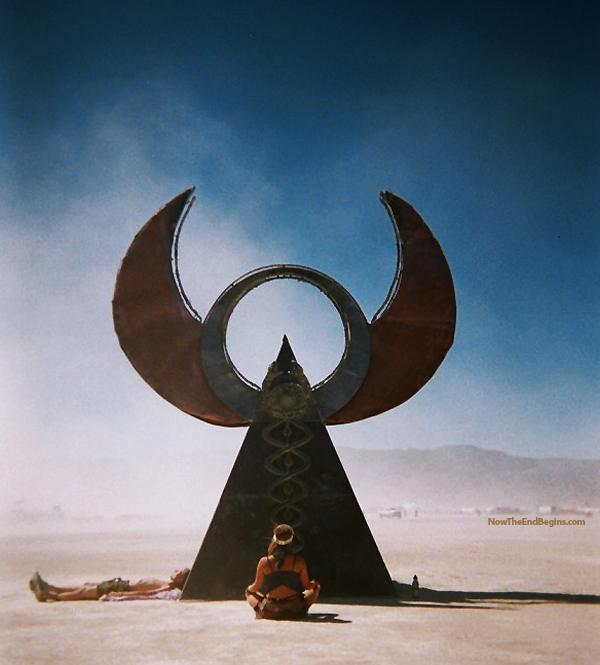 A worshipper praying to her pagan god, Osiris, at Burning Man 2013

But the reality of the Burning Man is much closer to worship of the gods of the underworld than it is to Woodstock. Every manner of perversion and occultic practice is on open display during the annual Labor Day Weekend extravaganza. This is Old Testament Baal worship on overdrive. Here is a report on this year’s Burning Man theme:

“By morning on Wednesday, there were 15 streets circling the temporary city created by attendees and the forecast remains free of dust storms. Many have been impressed by the size and look of this year’s Man Base, a structure that houses the iconic ‘Man’ figure burned each year near the event’s close. Inside a flying saucer under the Man is a multi-level structure with zoetropes, a giant chandelier and views of Black Rock City. Slides serve as exits. 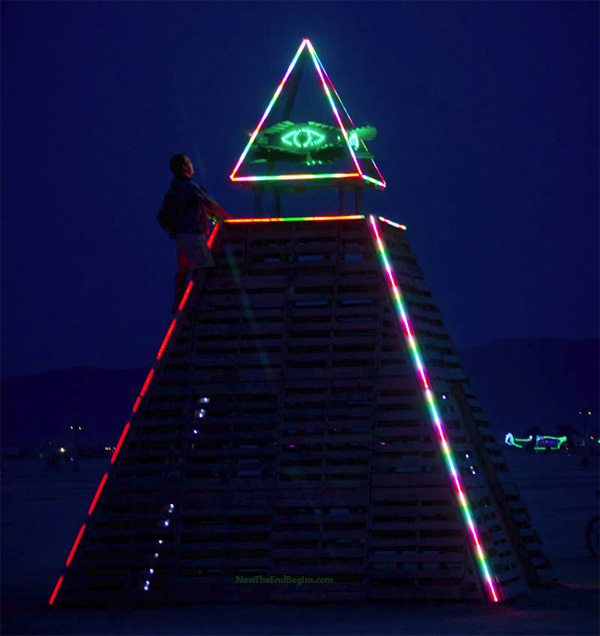 Everything that the Bible says that God hates, like idol worship and sacrificing to false gods, is on full display all week long.

The art theme this year is ‘Cult Cargo’ and focuses on a strange being called John Frum. ‘He is known to us by many names, this Visitor from Elsewhere, dispenser of endless abundance and wielder of mysterious technologies: John Frum, Quetzalcoatl, Osiris, “Bob,”‘ reads the website. ‘His cargo is splendid, his generosity boundless, his motives beyond our understanding. But across the ages and around the world, the stories all agree: one day he will return, bearing great gifts. ‘Our theme this year asks three related questions; who is John Frum, where is he really from, and where, on spaceship Earth, are we all going?'” source – Daily Mail UK 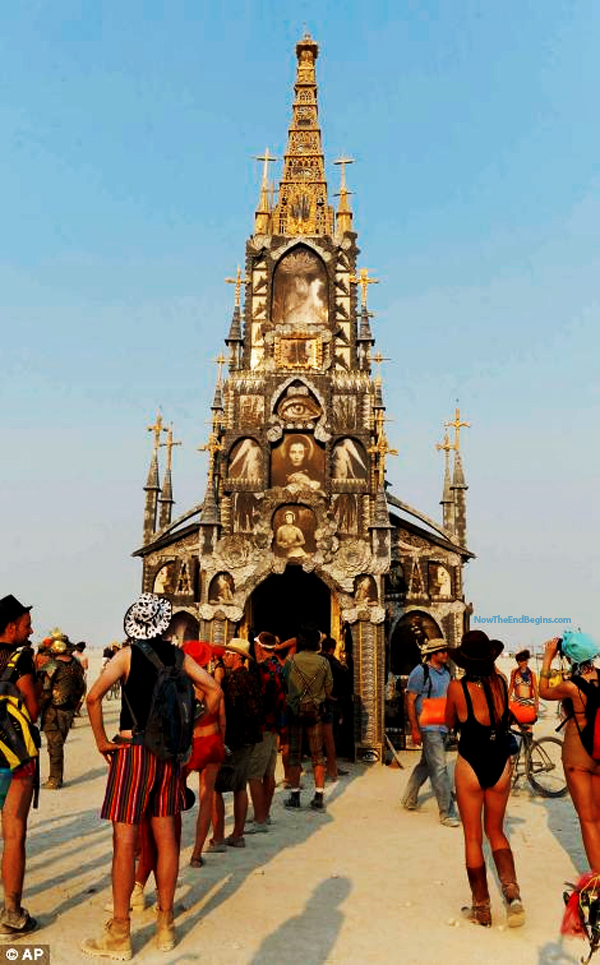 One of the many temples in Burning Man City. You can clearly see the All-Seeing Eye of Horus, various fallen angels, and leaders of the Satanist movement.

Bringing back the gods

The leaders of this massive gathering have a stated, open and obvious aim: to prepare their followers for the appearance of a mystical man from Outer Space to lead them. And with nearly 70,000 worshippers in attendance, this pagan church in the desert is rapidly spreading their religion. Of course, regular readers of the bible know exactly who this man is. The bible describes him this way:

The “grand finale’ of Burning Man 2013 is a Genesis 6 giant-sized man burning in the everlasting torments and flames of Hell. Party on, people, it’s gonna be a rude awakening.

The Devil and all His followers are fascinated with fire and things burning. This is easy to understand as Hell is filled with fire and those there will burn forever and ever. The ironic twist to it all is that the Devil Himself will burn in the fires of His own Hell. 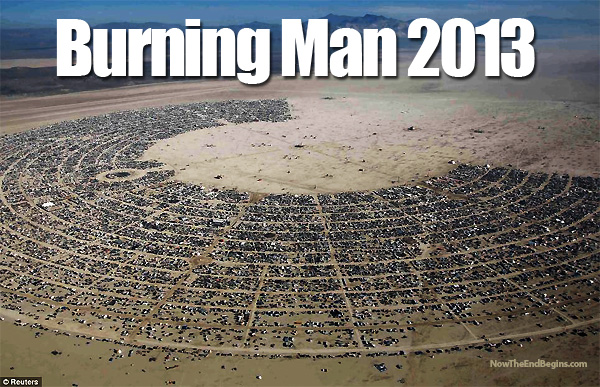 The massive, sprawling expanse of this year’s Burning Man festival with it’s city in the shape of a UFO.

It is no coincidence that as we get closer to the end times events described in the Bible, that the dark underworld of Satan will dramatically rise and assume a larger and larger role in our everyday society. Everything that the Burning Man festivals stand for is described in the Bible as things that God hates. False gods, idol worship, the groves…all these things incurred God’s wrath on the practicers.

“But they rebelled against me, and would not hearken unto me: they did not every man cast away the abominations of their eyes, neither did they forsake the idols of Egypt: then I said, I will pour out my fury upon them, to accomplish my anger against them in the midst of the land of Egypt.” Ezekiel 20: 8

The time is short, the hour has grown late and the sky above us is ever-darkening. All those who practice these abominations and spit in the face of the Holy God of Israel will one Day soon feel the wrath that fell upon the people of Noah’s day in the flood, and Lot’s day with the destruction of Sodom and Gomorrah. Tear down your idols and ask the Lord Jesus Christ to save you.

Before it’s too late.