He said: 'The threat from Russia and the risk it brings of a miscalculation resulting in a strategic conflict, however unlikely we see it as being right now, represents... 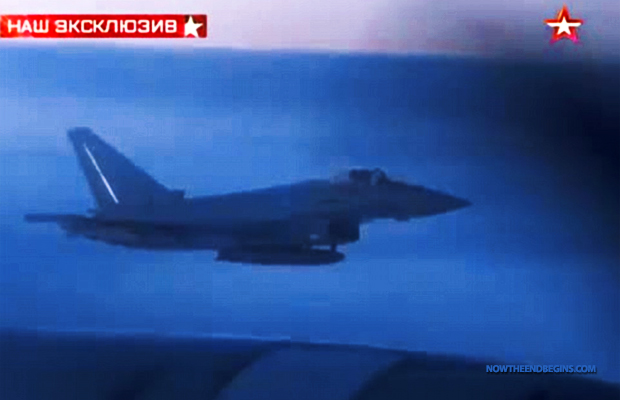 Britain’s top NATO commander today warned that current tensions with Russia represent an ‘existential threat to our whole being’ and could escalate into all out war.

During a speech in London, General Sir Adrian Bradshaw, said that Russian President Vladimir Putin could use ‘Soviet-style’ tactics to seize former Baltic states such as Estonia, Latvia and Lithuania.

General Bradshaw, a former director of British special forces and the deputy supreme allied commander Europe, backed plans to set up NATO force integration units in eastern Europe designed to counter a ‘range of hybrid threats’ claiming they would ‘send a strong signal’ to the Kremlin.

Up in the air: Footage of British and French fighter jets escorting a Russian bomber has been released by a Kremlin-backed TV station

He said: ‘The threat from Russia and the risk it brings of a miscalculation resulting in a strategic conflict, however unlikely we see it as being right now, represents an existential threat to our whole being.’

The general claimed Russia may use both traditional Soviet-tactic of escalation dominance as well as hybrid warfare techniques to seize NATO territories.

He pointed to the take-over of Crimea as an example of ‘hybrid warfare’ – where the use of un-uniformed soldiers of unknown nationality and propaganda blurred the true extent of their involvement. He said that this makes it difficult to judge the true extent of Russian involvement and it therefore becomes hard for all 28 NATO member states to agree on the appropriate response. 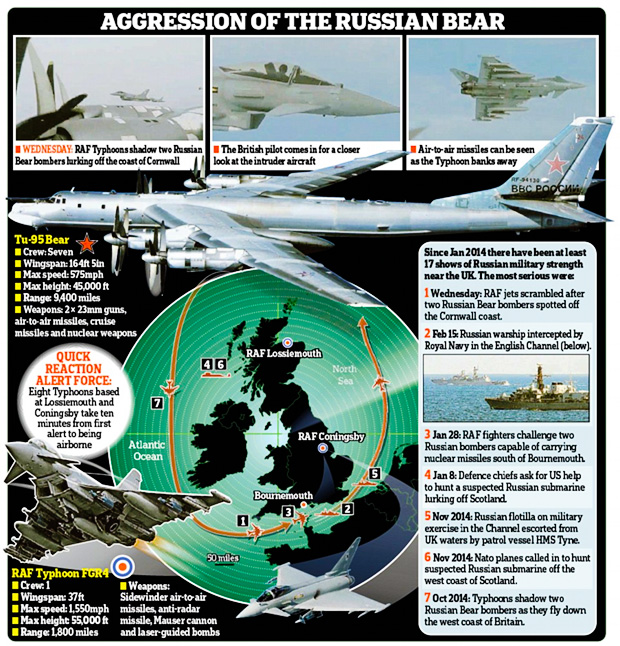 He explained: ‘The resulting ambiguity [makes] collective decisions relating to the appropriate responses more difficult’. The takeover of Crimea was preceded by Russia conducting large-scale military exercises along their border with Ukraine.”

NATO believes that as the unrest began Russian soldiers in unmarked uniforms were secretly sent into Ukraine to bolster separatist forces. It is also believed that Russia has been secretly arming the separatists, something which the Kremlin denies.

Today Secret services in Ukraine accused a senior political aide to Vladimir Putin of directing the snipers in Kiev who sparked the bloodshed that lead to last year’s revolution.

The increasingly fragile ceasefire appeared close to breaking point amid claims by the U.S. that pro-Russian rebels had fired on Kiev forces 49 times in the last 48 hours and more than 250 times since the start of the truce on Sunday.

Read the rest of this story on Daily Mail UK…