Soros urges the then-Secretary of State to get the international community involved and pressure the Prime Minister to “forestall further demonstrations” and “tone down public pronouncements” as well appointing a senior European official to act as the mediator. The left wing billionaire also gave Clinton a list of potential nominees to appoint as mediator: Carl Bildt, Martti Ahtisaari and Miroslav Lajcak.

EDITOR’S NOTE: George Soros is the puppet master of the New World Order, and he is using his vast wealth to spur Muslim migration in Europe, race wars in America as well as rigging digital voting booths. Now WikiLeaks reveals that he has had Crooked Hillary in his back pocket for quite sometime. To date, she has accepted $25 million in donations from the Soros machine.

An e-mail provided by WikiLeaks showed Soros reaching out to Secretary Clinton over a foreign policy dispute in Albania.

“A serious situation has arisen in Albania which needs urgent attention at senior levels of the US government. You may know that an opposition demonstration in Tirana on Friday resulted in the deaths of three people and the destruction of property.

“There are serious concerns about further unrest connected to a counter-demonstration to be organized by the governing party on Wednesday and a follow-up event by the opposition two days later to memorialize the victims.

“The prospect of tens of thousands of people entering the streets in an already inflamed political environment bodes ill for the return of public order and the country’s fragile democratic process.”

Soros urges the then-Secretary of State to get the international community involved and pressure the Prime Minister to “forestall further demonstrations” and “tone down public pronouncements” as well appointing a senior European official to act as the mediator. 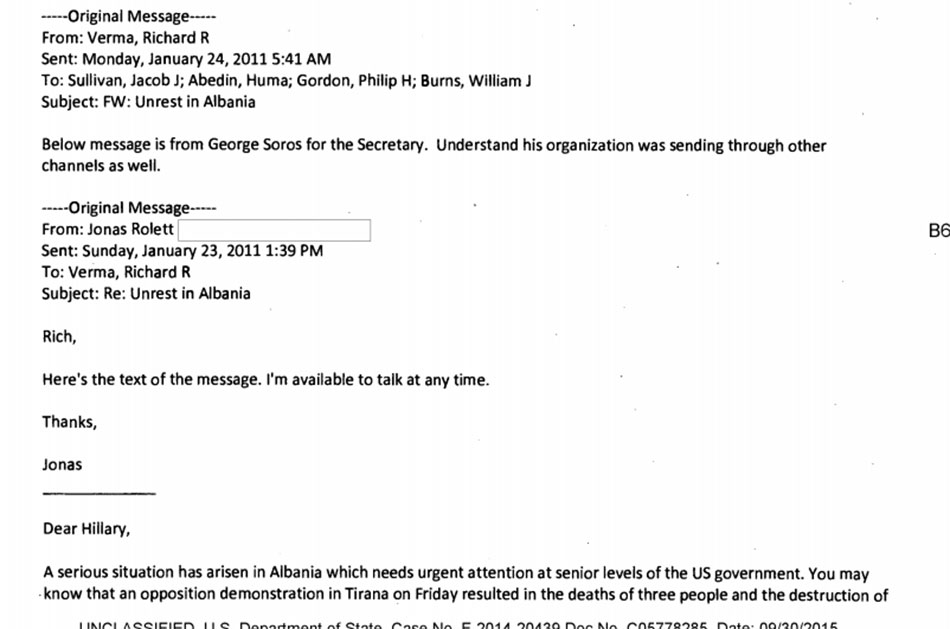 CLICK HERE TO READ THE ENTIRE EMAIL FROM WIKILEAKS

Crooked Hillary Says She Is Not “In Anyone’s Pocket’ After Taking Millions From George Soros:

Listen as Crooked Hillary’s liberal interviewers actually laugh out loud as she tries to assert that she is “not in anyone’s pocket”.

The e-mail was sent from Soros’ aide to Richard Verma, then the Assistant Secretary of State for Legislative Affairs who forwarded it to several of Clinton’s top aides including Huma Abedin, Jacob Sullivan, and Philip Gordon. Sullivan forwarded it to Clinton.