To the Tampa Black Lives Matter protesters who turned out to “end racist violence,” the American flag is nothing more than a “piece of s**t.”... 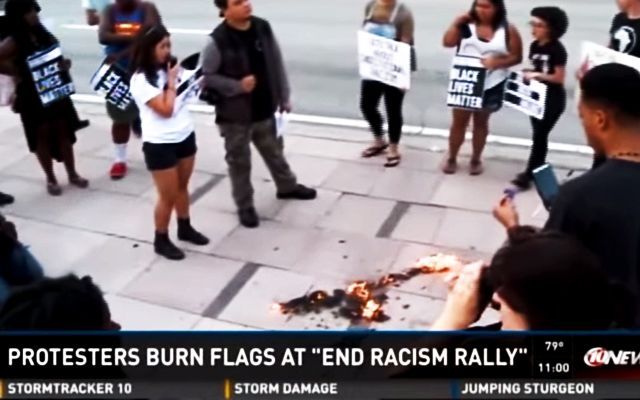 EDITOR’S NOTE: This is Barack Obama’s dream come true, an America divided by racism and racial hatred. We have already showed you how the Ferguson protests were organised by Obama’s boss George Soros to the tune of $33 million dollars. The Progressive Left will not stop until the cities of America are in flames and run with blood of racial hatred. This is Obama’s America 2015.

To the Tampa Black Lives Matter protesters who turned out to “end racist violence,” the American flag is nothing more than a “piece of s**t.” “To us the Confederate flag and the American flag, those represent the same thing which is that this country, this social system was built on slavery and genocide,” said protester Jesse Nevel, who represented the Uhuru Solidarity Movement.

Video captured the protesters burning the American flag while chanting “black lives matter.” Alekos Zambrano of Raices en Tampa organized the protest. He seemed to not anticipate the flag burning, but didn’t apologize for it.

“I’m not sure what message that sent. We just organized the event to make sure people came here and had an outlet to express themselves. We didn’t plan every detail,” he told 10 News.

Others were indifferent to desecrating the flag, too.

“It’s important to show solidarity with people of color because we’re all in this together. We all have a responsibility to try and make sure that people are safe and continue that American dream,” Kathy Morris said.

Protesters also carried a flag with a peace symbol. That was spared. It’s not the first time Nevel’s group has burned an American flag. The Uhuru Solidarity Movement staged a similar event in late June in Brooksville, Florida.

“Both the Confederate and the U.S. flags represent slavery, genocide and bloodshed. This country was built on the oppression of African people. White violence is as old as America itself. It is time white people to stand up and take responsibility for this history. Reparations for stolen black lives!” Nevel said, according to the group’s website. source