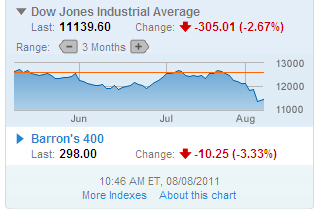 NEW YORK (AP) — The U.S. stock market joined a sell-off around the world Monday in the first trading since Standard & Poor’s downgraded American debt and gave investors another reason to be anxious.

The Dow Jones industrial average fell more than 250 points minutes after the opening bell on Wall Street. It recovered some of those losses, then fell again and was down 295 points in mid-morning trading.

Stock markets in Asia began the global rout. The main stock index fell almost 4 percent in South Korea and more than 2 percent in Japan. European markets opened later and fell, too, with Germany down 3 percent and France 2.5 percent.

It was the first chance for global investors to respond to S&P’s announcement late Friday that it was reducing its credit rating for long-term U.S. government debt by one notch, from AAA, the highest rating, to AA+. source – AP