Racial protests supposed to be peaceful quickly turned into violent #BlackLivesMatter riots on Saturday evening, closing down the city of Baltimore for some time—and creating a panic for thousands... 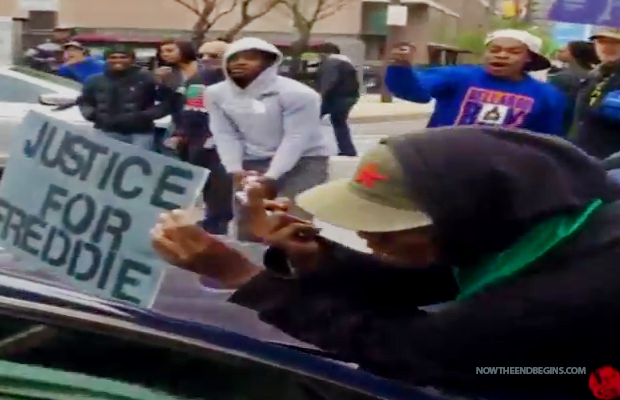 BALTIMORE, Maryland — Racial protests supposed to be peaceful quickly turned into violent riots on Saturday evening, closing down the city of Baltimore for some time—and creating a panic for thousands of people as just 50 miles away elites in Washington partied with President Barack Obama at the White House Correspondents’ Dinner.

They were protesting the death of Freddie Gray, who Agence France Press newswire wrote “died last Sunday from spinal injuries, a week after his arrest in the city’s impoverished west side.”

“In a press conference Friday, officials acknowledged Gray should have received medical help at the moment of his arrest, when he was seen by bystanders — and caught on video — howling in apparent pain,” AFP wrote, providing the background of the simmering tensions in the mid-Atlantic port town. “They also revealed that Gray, contrary to police department policy, was not buckled into his seat in the van, which made at least three unexplained stops on its way to the Western District police station. Gray died Sunday with 80 percent of his spine severed at the neck, lawyers for his family have said. His funeral is scheduled for Monday. Six officers have been suspended with pay as the police investigation inches closer to a May 1 deadline to submit findings to a Maryland state prosecutor, who could decide to press charges.”

All of a sudden, everything went haywire. What were peaceful marchers holding up signs turned into violent rioters. Innocent fans standing by were confronted by the rioters, who physically and verbally threateningly engaged many of them—and then the protesters got even more violent.

All of a sudden, beer bottles and cans, and other projectiles were lobbed by the protesters into the crowds of fans. To get those projectiles, the protesters stole them forcibly from the bartenders and vendors set up outside each of those three bars. One beer can whizzed by my brother’s face, missing him by about six inches, and more flew all over the crowded area.

The crowd of protesters then stopped a blue station wagon carrying a white family as they tried to drive past Pickles, Bullpen and Sliders along a narrow one-way stretch between the bars and the main road. As a horde of them smashed their open and closed fists on the hood of the car—while impeding them by standing in front of them—the driver backed up on the one way pass in a desperate attempt to get out of dodge. Then, stopped on the other side with nowhere to go, protesters ripped open the passenger door of the car and began reaching around inside the vehicle. As hundreds of people looked on, including several police officers who didn’t engage the violent protesters, the white woman in the front seat—middle-aged and a little heavyset with dark hair—was visibly terrified. The group of black men who ripped open the car door suddenly realized they were separated from the larger group of protesters and abandoned their quest to seemingly either carjack the station wagon or rob the people inside in front of hundreds, driving out of the one-way street back onto the main road and presumably out of dodge.

As projectiles continued flying everywhere from each part of the crowd—like a war-zone—another black man then charged into the crowd of Red Sox and Orioles fans standing outside Pickles Pub and tore the metal barricades apart throwing them into the now-crowded one-way pass where the assaulted station wagon was a moment ago. source