Palestinian terrorists in Gaza targeted cities, towns, and farming regions in southern Israel with waves of rockets throughout Friday and Saturday, setting off air raid sirens and injuring eight... 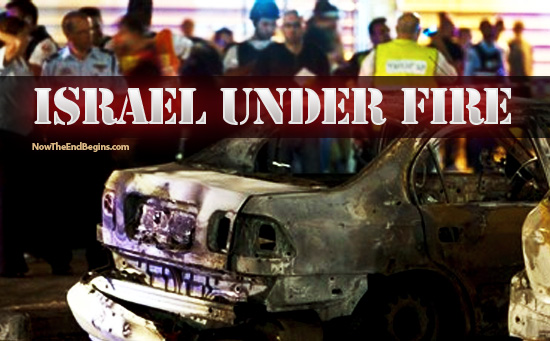 Palestinian terrorists in Gaza targeted cities, towns, and farming regions in southern Israel with waves of rockets throughout Friday and Saturday, setting off air raid sirens and injuring eight people

Ninety two rockets – Qassams and the longer-range Grads – were fired by midday Saturday at civilian regions. Of those, the Iron Dome anti-rocket system intercepted 25 projectiles heading directly into city centers in Ashdod, Be’ersheba and Ashkelon. Sixty seven rockets exploded in Israeli territory, most of them in open fields. The barrage came after the IAF foiled a major terror attack, killing the secretary general of the Popular Resistance Committees, Zuhair Qaisi.

Eight people were injured on Friday evening. In the Eshkol Regional Council, a 40-year-old man was seriously injured from rocket shrapnel, a second man was moderately injured by shrapnel in his stomach, and a third was lightly injured. Paramedics said the injured were foreign workers. An electric pole and a vehicle were also damaged in the same area.

Police bomb squad units moved from one explosion site to another seeking to ensure that the fallen rockets did not pose a further threat to the public.

The rocket barrages tapered off at around 3 a.m., but resumed again on Saturday morning, when air raid sirens rang out in Be’ersheba and Ashdod. In the Be’er Tuvia area, police located a rocket explosion site late on Friday night. The windows of a home were shattered and a car was damaged by the projectile. No injuries were reported. In addition to the major southern cities, terrorists targeted Israeli communities in the Eshkol Regional Council, Sha’ar Hanegev Regional Council, and other rural communities close to Gaza.

The IDF Home Front Command instructed all civilians living within 40 kilometers of the Gaza Strip to behave cautiously and ensure that they were never far from a designated safe room and away from windows.

Further details are available on the website of the Home Front Command: http://www.oref.org.il/315-en/PAKAR.aspx

The IAF struck targets in Gaza overnight Friday and Saturday morning in response to the rocket attacks. 14 Palestinians – 10 of them members of Islamic Jihad – were killed in the strikes and another 20 were injured, according to Palestinian news agency Ma’an.

The Popular Resistance Committees (PRC) swiftly called for retaliation following the first IAF strike that killed Qaisi, as well as senior PRC member Ahmad Hanini. A third man was also injured in the attack. The IAF struck a vehicle in a move to thwart a large-scale terror attack that was in its last stages of preparation, according to the IDF spokesperson.

“Egypt is highly distraught by the Israeli attacks,” MENA quoted Foreign Minister Mohamed Kamel Amr as saying on Saturday. “Egypt is currently exerting efforts and making crucial calls for an immediate end to this Israeli escalation to end bloodshed of our brothers.”

The IDF stated that the attack was part of an operation to thwart the intentions of terrorists to carry out terror attacks in Sinai, along the border between Israel and Egypt. Qaisi had been planning and leading over the past few days, a major terror attack against Israeli targets, and the strike was conducted in order to prevent the attack, the IDF said in a statement. It added that the IDF was not interested in escalation but was ready to defend Israel and would respond forcefully and decisively against against any attempt at terrorist activity. source – JPost