Arnold Schwarzenegger has been chosen by the French government to join Nobel prizewinners, philosophers, UN secretary generals, spiritual leaders and theologians to make the moral case for the world... 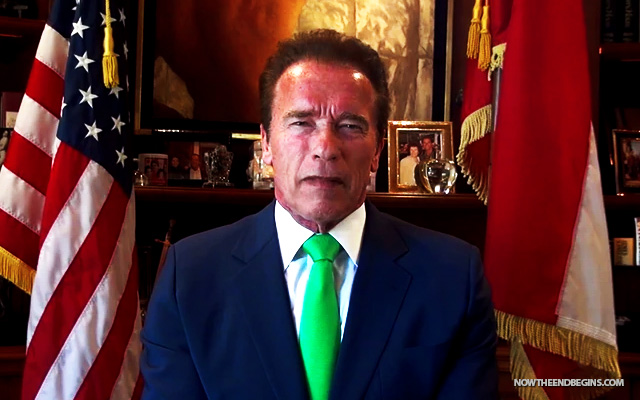 “I’ve starred in a lot of science fiction movies and, let me tell you something, climate change is not science fiction, this is a battle in the real world, it is impacting us right now.
by Geoffrey Grider July 23, 2015
NOW THE END BEGINS SHARE:

Arnold Schwarzenegger has been chosen by the French government to join Nobel prizewinners, philosophers, UN secretary generals, spiritual leaders and theologians to make the moral case for the world to act urgently on climate change.

EDITOR’S NOTE: With Pope Francis leading the way, calls for a crusade to combine the world’s religions with the Climate Change movement are intensifying. Paris was host this week for a Summit of world leaders to make this a reality. Arnold Schwarzenegger has been selected as their spokesman and appears in a video calling for the “gospel of Climate Change to be preached” in every “church, mosque and temple” across the world.

Talking at the world’s first summit of conscience for the climate on Tuesday – ahead of the crucial UN climate change meeting in the city in December – the Terminator star and former California governor declared the science debate over, saying planetary catastrophe could only be avoided with ethical action:

“I’ve starred in a lot of science fiction movies and, let me tell you something, climate change is not science fiction, this is a battle in the real world, it is impacting us right now.

“I believe the science is in. The debate is over and the time for action is now,” he told an invited audience of intellectuals and spiritual leaders from all faiths. “This is bigger than any movie, this is the challenge of our time. And it is our responsibility to leave this world a better place than we found it, but right now we are failing future generations.”

Cardinal Peter Turkson, Ghanaian president of the Vatican’s Pontifical council for justice and peace, who helped Pope Francis write the encyclical on human ecology published last month, said that the climate is a common good. “It is a global common meant for all but the costs are being borne by those who have least contributed to it.

“At stake now is the wellbeing of the earth, our common hope. What we need is care. When we care for something it is with passion and commitment of the heart. That’s why Pope Francis called for care of the earth. A sense of passion is needed.”

Muslim theologians, Christians and Hindus said they saw climate change both as an existential threat and as an opportunity for renewal. Sheikh Bentounes, leader of the Sufi brotherhood Alawiya, urged mankind to carry “a hope of a future”.

“The prophet Mohammed called on man to plant and sow seeds. He said ‘Even at the end of times continue to plant and sow.’ We have responsibility to carry this hope to the end. This tiny vessel in infinite space that we call earth is unique.”

Daoists, Confucians, shamans, Jesuits, Bhuddists and others called for politicians to act on behalf of humankind at Paris. Patriarch Bartholomew, leader of 300 million Orthodox Christians, despaired at humanity’s blindness, but quoted writer Fyodor Dostoevsky saying that “beauty would save the earth”.

“Scientists and theologians agree that humanity depends on nature. We must accept the moral imperative for action. Religion must also be involved in the crucial question of climate change”, said Bartholomew. source