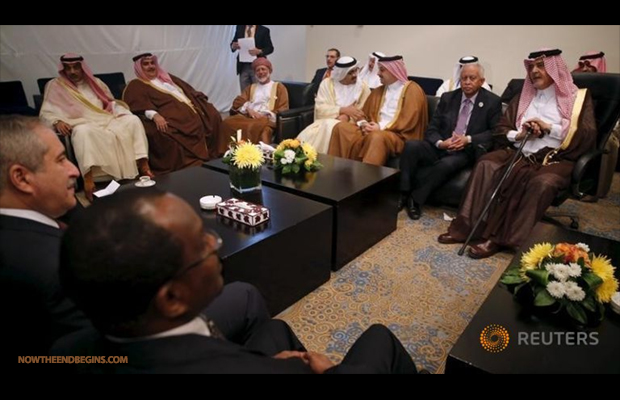 “They have said, Come, and let us cut them off from being a nation; that the name of Israel may be no more in remembrance. For they have consulted together with one consent: they are confederate against thee: The tabernacles of Edom, and the Ishmaelites; of Moab, and the Hagarenes; Gebal, and Ammon, and Amalek; the Philistines with the inhabitants of Tyre; Assur also is joined with them: they have holpen the children of Lot. Selah.” Psalm 83:4-8 (KJV)

Is The a Prelude To The Coming Psalm 83 War?

The bible says that in the last days, there is a great Muslim confederacy created, a united army, that eventually comes against Israel as a group. So it is with great interest that we see today, in Egypt, an historic resolution drafted by Arab leaders to create a first-ever United Arab Muslim Armed Forces.

The agreement came after warplanes from Saudi Arabia and Arab allies struck Shi’ite Muslim rebels in Yemen on Thursday, in an effort to check Iranian influence in their backyard without direct military backing from Washington.

Arab foreign ministers speak together before meeting ahead of the Arab League Summit in Sharm el-Sheikh, in the South Sinai governorate, south of Cairo, March 26, 2015. REUTERS/Amr Abdallah Dalsh

“The Arab ministers agreed on adopting an important principle, which is forming the unified Arab military force,” Arab League Secretary General Nabil Elaraby told reporters after the meeting in the resort of Sharm El-Sheikh.

“The task of the force will be rapid military intervention to deal with security threats to Arab nations,” Elaraby added.

The draft resolution will be referred to the Arab leaders during their March 28-29 summit in Egypt.

Egyptian TV reported earlier that the ministers asked Elaraby to coordinate with Arab armies’ chiefs of staff within one month to begin forming the unified force.

The Arab league chief described the resolution as “historic”. source