The Journal News has hired armed security guards from New City-based RGA Investigations and that they are manning the newspaper’s Rockland County headquarters at 1 Crosfield Ave., West Nyack,... 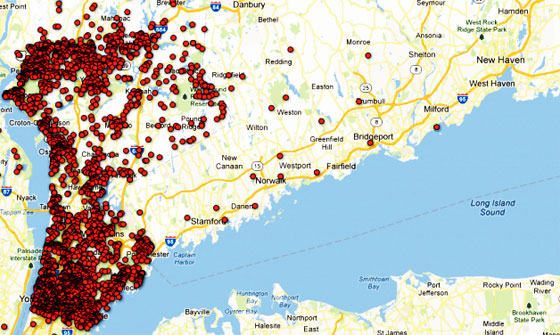 There isn't a liberal gun hater anywhere in the world that doesn't like guns when their security is threatened.
by Geoffrey Grider January 2, 2013
NOW THE END BEGINS SHARE:

Guns are good for the goose but NOT for the gander.

A Clarkstown police report issued on December 28, 2012, confirmed that The Journal News has hired armed security guards from New City-based RGA Investigations and that they are manning the newspaper’s Rockland County headquarters at 1 Crosfield Ave., West Nyack, through at least tomorrow, Wednesday, January 2, 2013.

There isn’t a liberal gun hater anywhere in the world that doesn’t like guns when their security is threatened.

According to police reports on public record, Journal News Rockland Editor Caryn A. McBride was alarmed by the volume of “negative correspondence,” namely an avalanche of phone calls and emails to the Journal News office, following the newspaper’s publishing of a map of all pistol permit holders in Rockland and Westchester. (see map above, red dots show every legally-registered gun owner’s home address)

Due to apparent safety concerns, the newspaper then decided to hire RGA Investigations to provide armed personnel to man the location.

Private investigator Richard Ayoob is the administrator of RGA. He told the Clarkstown Police on Friday, December 28 that there had been no problems on site at the Journal News headquarters despite the massive influx of phone calls and emails.

McBride had filed at least two reports with the Clarkstown Police Department due to perceived threats. However, the police did not find the communications in question actually threatening. Incident-Report 2012-00033099 describes McBride telling police she was worried because an email writer wondered “what McBride would get in her mail now.”

The Journal News caused an international stir when they released an interactive map of pistol permit holders names and addresses in Rockland and Westchester counties last Sunday, December 23. The editors have said they believe knowing where guns are is in the public’s interest. The newspaper has also taken a strident editorial position in favor of strict gun control.

Rather than take the map down following the public uproar, the executive board at the Journal News has decided to “stick to their guns” and double-down on their original decision, as they have said a map listing all pistol permit holders in Putnam County will soon to be posted.

The controversial use of the Freedom of Information Act to create the interactive map may come back to bite the Journal News and others who would prefer that pistol permits remain public record.

It is not clear whether the negative reaction has threatened the Journal News’ true popularity as a news source. As an anecdotal piece of evidence, the Rockland County Times confirms receiving an influx of new subscribers who stated they cancelled their subscription to the Journal News due to the gun story. source – Rockland Times