On Sept. 19, 2014, the five-day average of Antarctic sea ice extent exceeded 20 million square kilometers for the first time since 1979, according to the National Snow and... 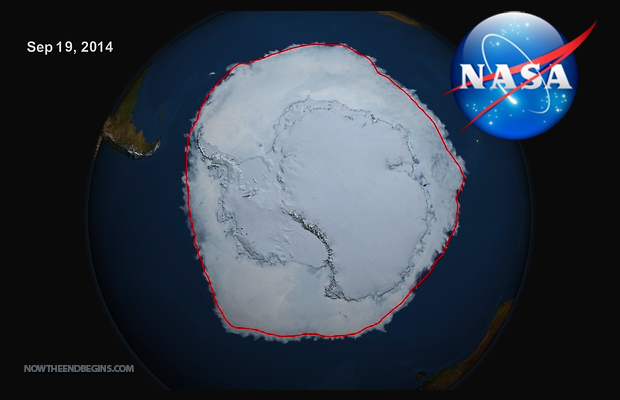 On Sept. 19, 2014, the five-day average of Antarctic sea ice extent exceeded 20 million square kilometers for the first time since 1979, according to the National Snow and Ice Data Center.

As Al Gore and his minions continue to desperately try and maintain the global-warming-climate-change-hoax, the ice cold facts say otherwise. Antarctic ice reached crazy high levels this year as the planet continues to cool off. Record chill and snowfalls all across America attest to the non-warming status of our every-changing planet.

Sea ice surrounding Antarctica reached a new record high extent this year, covering more of the southern oceans than it has since scientists began a long-term satellite record to map sea ice extent in the late 1970s. The upward trend in the Antarctic, however, is only about a third of the magnitude of the rapid loss of sea ice in the Arctic Ocean.

The new Antarctic sea ice record reflects the diversity and complexity of Earth’s environments, said NASA researchers. Claire Parkinson, a senior scientist at NASA’s Goddard Space Flight Center, has referred to changes in sea ice coverage as a microcosm of global climate change. Just as the temperatures in some regions of the planet are colder than average, even in our warming world, Antarctic sea ice has been increasing and bucking the overall trend of ice loss. source

John Coleman, who co-founded the Weather Channel, shocked academics by insisting the theory of man-made climate change was no longer scientifically credible. Instead, what ‘little evidence’ there is for rising global temperatures points to a ‘natural phenomenon’ within a developing eco-system.

In an open letter attacking the Intergovernmental Panel on Climate Change, he wrote: “The ocean is not rising significantly. “The polar ice is increasing, not melting away. Polar Bears are increasing in number.

“Heat waves have actually diminished, not increased. There is not an uptick in the number or strength of storms (in fact storms are diminishing).

“I have studied this topic seriously for years. It has become a political and environment agenda item, but the science is not valid.” source