Despite the fact that 99% of all terrorist attacks since 9/11 have been perpetrated by Muslims, the Department of Homeland Security and the FBI have once again issued a... 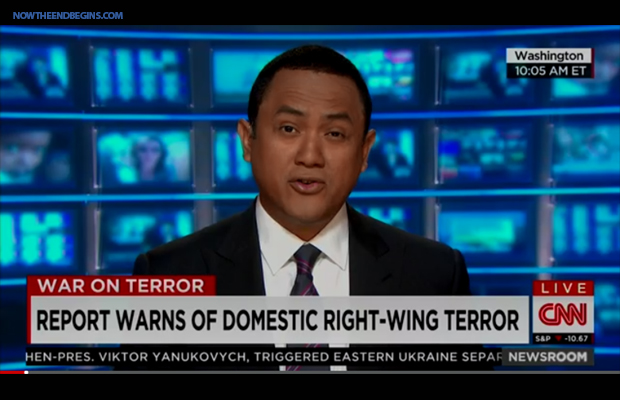 Despite the fact that 99% of all terrorist attacks since 9/11 have been perpetrated by Muslims, the Department of Homeland Security and the FBI have once again issued a statement that they view the threat of domestic terrorists to be equal to, or even greater than the threat of an Islamic attack in this country.

They’re focused on domestic terror threats from “right-wing sovereign citizen extremists” who view all government as the enemy, and refuse to recognize local and national authority. There have been 24 violent sovereign citizen related attacks across America since 2010. That’s a slow afternoon for ISIS.

When the DHS was initially organized, one of its early reports caused an uproar from millions of Americans. The agency named who they considered to be the most serious threats to national security: Conservatives, right-to-lifers, Evangelical Christians, 2nd Amendment adherents, Constitutionalists, as well as those who viewed the power of the Federal government as a threat to freedom. Nary a word about Muslims!

A new intelligence assessment, circulated by the Department of Homeland Security this month and reviewed by CNN, focuses on the domestic terror threat from right-wing sovereign citizen extremists and comes as the Obama administration holds a White House conference to focus efforts to fight violent extremism.

Anyone who is awake can see that the Globalists are actively dismantling the government of the United States so their totalitarian New World Order, headed by the Beast/Antichrist, can rise. They know they must subdue the American people because we won’t give up our freedoms without a fight, but every time they pull a false-flag attack to persuade us to give up our weapons, it backfires. Much to their consternation, we stubbornly run out and buy more guns and ammo.

Knowing this, the U.S. Army is preparing for what seems to be an inevitable showdown with the American people. In February 2014, Infowars.com reported that a 300 acre ‘fake city’ was built in Virginia, complete with a sports stadium, school, underground subway, bank, churches and road signs written in English, designed to train troops for future combat scenarios.

This complex, which cost $96 million dollars and took two years to complete, was supposedly built to prepare troops to occupy foreign cities and train for house-to-house combat. In 2013, former Navy SEAL Ben Smith warned that the Obama administration asked top military commanders if they would be comfortable with disarming U.S. citizens, a litmus test that included firing on fellow Americans. Those who refused were forced out, resulting in the most prolific purge of top military officers from every branch of service in this nation’s history.

A 2012 academic study about the future use of the military as a peacekeeping force within the United States depicted a shocking scenario in which the U.S. Army is used to restore order to a town that had been seized by Tea Party ‘insurrectionists. source

This study dovetails with a leaked U.S. Army manual that reveals plans for the military to carry out “Civil Disturbance Operations” in which troops would be used domestically to quell riots, confiscate firearms and even kill Americans during mass civil unrest. source

And, to round off the plans the wonderful luciferian elite have for us pesky, freedom-loving Americans, the manual also describes how prisoners will be processed and ‘re-educated’ in the numerous FEMA camps, scattered all over the country. source

Of course, all of this is in direct violation of the Posse Comitatus Act, passed in 1878, which limits the power of the Federal government in using military personnel to enforce state law. But then again, the Occupant of the White House has a phone and a pen, so what do silly laws matter?

Speaking of which, The Washington Examiner reported today that the Occupant is planning to use that pen of his to ban one of the most-used AR-15 bullets used by sportsmen and target shooters. The Bureau of Alcohol, Tobacco, Firearms and Explosives is proposing a ban on 5.56 M885 bullets by classifying them as ‘armor-piercing’ ammunition, despite absolutely no evidence this is true. Of course, this is nothing more than an attempt by this increasingly tyrannical administration to impose yet another backdoor method of gun control.

The government has spent the last few years hoarding untold billions—yes, that’s ‘billions’ with a ‘B’—of bullets, causing shortages for police forces and the general public, as well as driving the price of ammunition through the roof. I think it would be wise for any gun lovers out there start buying up all the rounds you can get your hands on. It appears you may need it to defend your family and your freedoms one of these days. God help us.

Even so, come quickly, Lord Jesus!