Putin and Alexis Tsipras signed a deal Friday to build an extension of a prospective gas pipeline that would carry Russian gas to Europe through Turkey. Russia promised Greece... 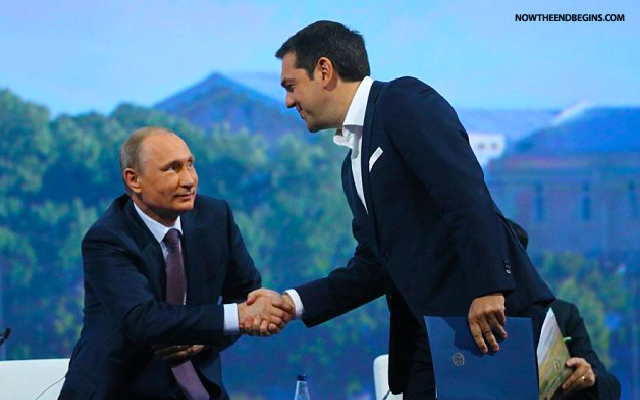 The talks were held after both leaders addressed investors and Russian government officials at Russia’s biggest annual economic forum.

“And now will I shew thee the truth. Behold, there shall stand up yet three kings in Persia; and the fourth shall be far richer than they all: and by his strength through his riches he shall stir up all against the realm of Grecia.” Daniel 11:12 (KJV)

EDITOR’S NOTE: Bible prophecy says that three of the biggest end times players in the Tribulation will be Russia, Iran and Greece, as mentioned in Daniel, Ezekiel and other places. The  Bible refers to them as Magog, Persia and Grecia. So what do we see in 2015? We see an aggressive and highly-energized Russia building nuclear reactors for Iran, and bailing out Greece at the last minute to keep them afloat. The Scriptures cannot be broken, and everything is right on track.

Speaking of the pipeline deal at a meeting with top executives of global news agencies, including The Associated Press, which began nearly three hours behind schedule at around midnight, Putin said he saw no support for the Greeks from the EU.

WHO IS ALEXIS TSIPRAS? CLICK TO FIND OUT MORE…

If EU wants Greece to pay its debts it should be interested in growing the Greek economy … helping it pay its debts,” he said. “The EU should be applauding us. What’s wrong with creating jobs in Greece?”

Greece is struggling to reach a deal with its creditors for new loans that it needs to avoid defaulting on debt payments at the end of the month. Without the bailout, Greece could be headed for bankruptcy or an exit from the 19-nation eurozone.

Tsipras’ visit gave rise to speculation that the Greeks may be seeking Russian loans – and ahead of the talks, Putin’s spokesman said Russia would consider a loan if the Greeks asked for one.

“We would do this because they are our partners and this is a normal practice between countries who are partners,” spokesman Dmitry Peskov told The Associated Press.

But when Tsipras met with Putin at the sidelines of a major economic forum in St.Petersburg, the possibility of a loan wasn’t discussed, Peskov told journalists. Instead, they spoke about “the necessity of developing investment cooperation.”

Russia and Greece signed a deal Friday to build an extension of a prospective gas pipeline that would carry Russian gas to Europe through Turkey. Russia promised Greece hundreds of millions of dollars in transit payments yearly if it agreed to build the pipeline. Construction of the pipeline is expected to start next year and be completed in 2019.

Russian Energy Minister Alexander Novak said Russia and Greece would be equal partners in the project, with Russia’s half owned by the state bank VEB. The talks were held after both leaders addressed investors and Russian government officials at Russia’s biggest annual economic forum. source