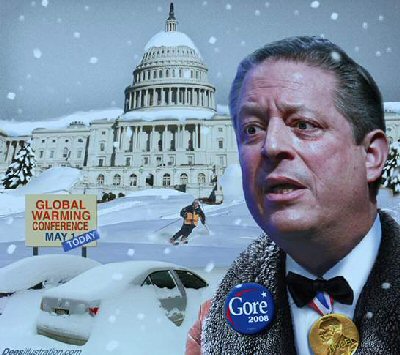 Is there no end to the idiocy? Is the New World Order’s desire to tax us to death so strong that even when their house of cards scam is exposed, they hold on to their lies to the bitter end? Case in point, is this quote take directly from Al Gore’s blog:

When it became obvious the planet was cooling and not heating up, Al Gore and Co. changed tactics to keep the green rolling in. Lol.

Last week on his show Bill O’Reilly asked, “Why has southern New York turned into the tundra?” and then said he had a call into me. I appreciate the question.

As it turns out, the scientific community has been addressing this particular question for some time now and they say that increased heavy snowfalls are completely consistent with what they have been predicting as a consequence of man-made global warming:

“In fact, scientists have been warning for at least two decades that global warming could make snowstorms more severe. Snow has two simple ingredients: cold and moisture. Warmer air collects moisture like a sponge until it hits a patch of cold air. When temperatures dip below freezing, a lot of moisture creates a lot of snow.”

“A rise in global temperature can create all sorts of havoc, ranging from hotter dry spells to colder winters, along with increasingly violent storms, flooding, forest fires and loss of endangered species.”