According to GasBuddy.com, motorists are shelling out $5.89 for a gallon of regular gas at a Shell station in Lake Buena Vista, topping out at $5.99 a gallon for... 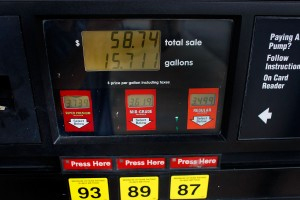 TAMPA (CBS Tampa) — Talk about pain at the pump! Some Florida drivers are spending nearly $6 a gallon to fill up their gas tanks.

A gas pump displays a sale of $58.74 at a gas station in Miami Beach, Fla. (credit: Joe Raedle/Getty Images)

“Prices over in the Disney World area are much higher than any other place in Florida,” Jessica Brady, AAA spokeswoman, told CBS Tampa, adding that people regularly complain about gas prices in that area.

The Sunshine State is opening up its wallet, paying an average of $3.67 a gallon of unleaded gas, 12 cents more than the national average. And it’s only expected to go up.