10,000+ Member PEGIDA Takes To Streets To Protest Islamization Of Germany

They march in their thousands every Monday evening, wave German national flags and angrily protest against "criminal asylum seekers" and the "Islamisation" of their home country.... 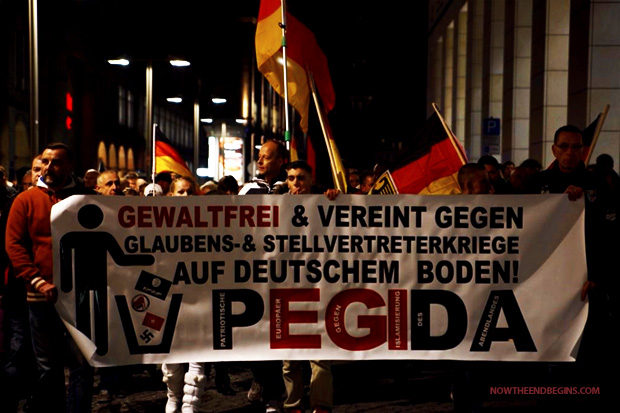 Patriotic Europeans against the Islamization of the Occident

When Muslims begin to grow in number in any country, they also begin demanding special laws and rights to be present for themselves as well. Muslims are on a conquest mission to “claim the world for Islam” via Sharia Law. Any nation that allows them to gain power, like England has done to their great regret, will suffer as a result. Here is what you need to know about Sharia Law.

Berlin – They march in their thousands every Monday evening, wave German national flags and angrily protest against “criminal asylum seekers” and the “Islamisation” of their home country. In recent months, Germany has witnessed the emergence of a far-right populist movement that has drawn support from hardcore neo-Nazis and also a small but growing anti-euro party, the AfD.

Germany was rattled this week when the latest in a series of marches in the eastern city of Dresden by the “Patriotic Europeans against the Islamisation of the Occident”, or PEGIDA, drew over 10,000 people.

The group’s name is in itself “a veritable call to arms by far-right populists”, evoking echoes of Christian crusaders and Nazi propaganda, said Hajo Funke of Berlin’s Free University.

“It’s about the mobilisation of resentment, about establishing an enemy. It becomes dangerous if it turns into contemptuous aggression and the awakening of mob instincts,” the political scientist told AFP.

PEGIDA, launched in October, has grown and spawned smaller copycat groups nationwide, provoking much soul-searching in a country haunted by its history of Nazi terror and the Holocaust.

Read the rest of the story on Yahoo News…

Tags
germanyPatriotic Europeans against the Islamisation of the OccidentPEGIDAsharia law