Yemen Teeters On The Brink

As their country teeters on the brink, many of Yemen's children draped in their country's flag today joined a protest against incumbent president Ali Abdullah Saleh. The middle eastern... 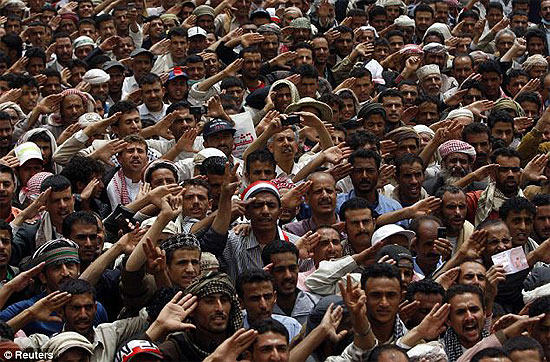 A country in chaos
As their country teeters on the brink, many of Yemen’s children draped in their country’s flag today joined a protest against incumbent president Ali Abdullah Saleh. The middle eastern country is locked in a stalemate between the ruler for 32 years and hundreds of thousands of citizens who want him to leave power.

Protesters have camped in cities and towns for weeks now, inspired by the wave of people power sweeping the Middle East, amid a series of violent clashes.

After forces to Saleh opened fire on demonstrators last week, killing over 40, the protesters’ ranks were bolstered by a series of high-level officials from the country’s military, diplomatic corps and civil servants, including the president’s former chief adviser, Ali Mohsen.

Today, President Saleh, convened a meeting of his ruling General People’s Congress party to discuss the situation. They recommended forming a new government to draft a new constitution based on a parliamentary system in line with reform offers by President Saleh ‘Members of the central committee of the People’s Congress stress the quick need to form a government tasked with drafting a new constitution for the country on the basis of a parliamentary system,’ a report said.” source – Daily Mail UK