'If you know where we are please bomb us... There is no life after this. I'm going to kill myself anyway - others have killed themselves this morning.'... 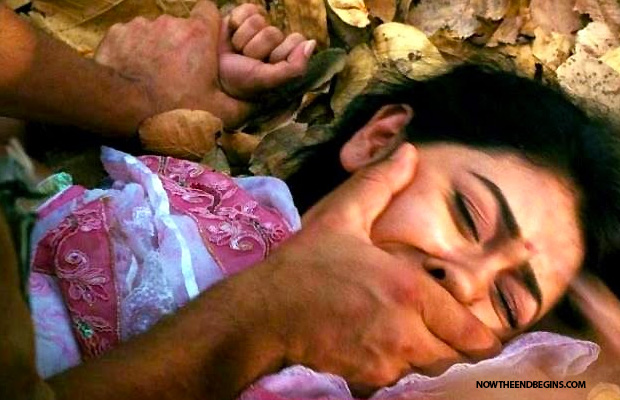 The unidentified woman is understood to have been kept as a prisoner of the jihadists somewhere in western Iraq having been captured by ISIS during the Sinjar massacre in early August.
by Geoffrey Grider October 21, 2014
NOW THE END BEGINS SHARE:

“Dearly beloved, avenge not yourselves, but rather give place unto wrath: for it is written, Vengeance is mine; I will repay, saith the Lord.” Romans 12:19

This is suffering on an unimaginable level. Please pray that the Lord God of Abraham, Issac and Jacob will step in and do something to end their pain and anguish. Please keep these dear Yazidi women in your prayers, and we ask that you share this story to raise awareness of their plight. Thank you.

A group raising awareness of ISIS’ persecution of women in the vast swathes of the Middle East under its control said the woman had contacted Kurdish peshmerga fighters by telephone to plead for the brothel to be bombed to put the women held as sex slaves out of their misery.

The unidentified woman is understood to have been kept as a prisoner of the jihadists somewhere in western Iraq having been captured by ISIS during the Sinjar massacre in early August.

She allegedly told the fighters she had been raped so frequently that she could no longer use the toilet, adding that the ordeal has been so harrowing that she plans to commit suicide even if freed.

Details of the woman’s brutal experience at the hands of the Islamic State emerged during an interview with Kurdish activists staging demonstrations in London to raise awareness of the plight of women in the Middle East.

During an interview with BBC World Service, a man identified as Karam described how a friend embedded with the peshmerga took a phone call from the Yazidi woman.

Describing the woman as crying on the phone, Karam quoted her as saying: ‘If you know where we are please bomb us… There is no life after this. I’m going to kill myself anyway – others have killed themselves this morning.’

‘I’ve been raped 30 times and it’s not even lunchtime. I can’t go to the toilet. Please bomb us,’ he claimed the woman added.