World’s Oldest Statue Is Of A Giant 17.4 Foot Nephilim From Genesis

The giants of Genesis are planning on making a return in the days after the Rapture “There were giants in the earth in those days; and also after that,... 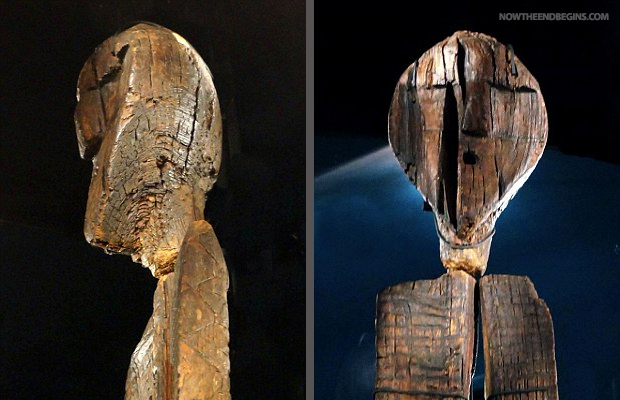 “There were giants in the earth in those days; and also after that, when the sons of God came in unto the daughters of men, and they bare children to them, the same became mighty men which were of old, men of renown.” Genesis 6:4

EDITOR’S NOTE: The listed date of 9,500 years old for the Shigir Idol statue may or may not be accurate, but that’s not the focus of this article. Our focus is that way back in ancient times, people made statues of the giants that the bible says walked the earth. Giants were indeed real, and statues like this have preserved that record for all time. We at NTEB believe in a 6,000 year old date for the creation of man, and we also believe that the earth itself is a lot older than that as mentioned in Genesis 1:1 and 1:2.

For those of us who are able to open the pages of the Holy Bible and believe what we read in the context that we read it in, it is a strange and marvelous book filled with the answers to mankind’s oldest questions. The bible tells us how we got here, who we truly are, and gives us the choice of where we wish to spend all eternity. And it talks about giants. Really, really big giants. 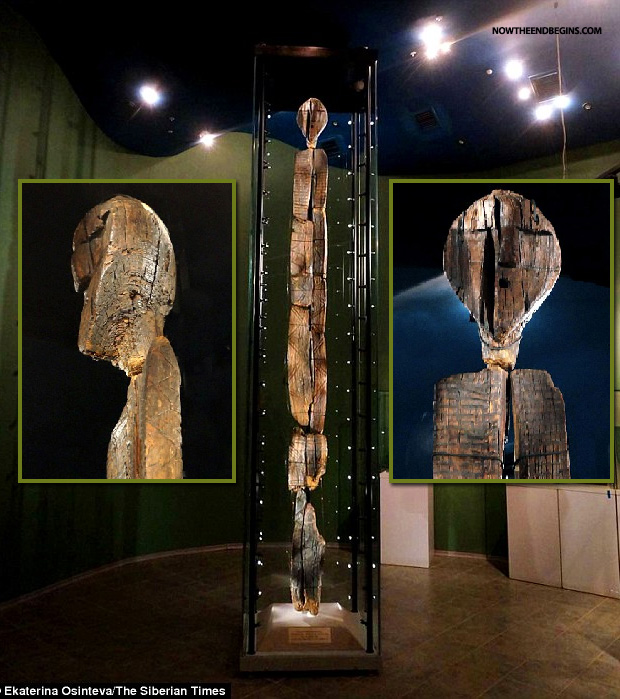 Secret encrypted codes on Shigir Idol written around 9,500 years ago

The earth, from it’s earliest days, was inhabited by the sons of God and they roamed freely about the earth even after God created man in Genesis chapter 1. We know this to be true because in Genesis chapter 3 where Satan is tempting Eve, he says this strange thing to her:

“For God doth know that in the day ye eat thereof, then your eyes shall be opened, and ye shall be as gods, knowing good and evil.” Genesis 3:5

Eve at no point asks Satan who these other “gods” are, for she and Adam are in the Garden with them. These are the same sons of God from Job chapter 1, and from the book of Jude. Some of these sons of God fell, and they had physical relations with earthly women in Genesis chapter 6 (see verse at top of article.) The end result being that all through the book of Genesis and for hundreds of years, man and these giant creatures lived together. Take a look at a random sampling of verses talking about giants and man together:

Yes, giants are all through the Old Testament as simply a recorded fact in the human timeline. The flood of Noah was sent by God because these half-human, half-angel giants, or Nephilim in Hebrew, were living so wickedly that God wiped out everyone on the planet except for Noah and his family. But a race of giants existed after the flood, they came back. In the New Testament, Jesus says that the days immediately preceding the time of Jacob’s Trouble, what we call the Great Tribulation, will be just like it was back in Noah’s day. That means giants will once again roam the earth in the sight of man.

Now, I said all that to say this: the world’s oldest statue has made a startling reappearance on the scene in these last days, and now that you know all about giants in the bible, you tell me whoever made this statue had in mind when they were carving it:

Here are some key facts of the Shigir Idol:

The Shigir Idol is thought to be the most ancient wooden sculpture in the world.

It was made during the Mesolithic period, around 7,500 BCE but was only discovered in 1890 in Kirovgrad, Sverdlovsk region, in the Ural Mountains.

The messages carved into the ornament ‘remain ‘an utter mystery to modern man’, according to experts.

Some say the straight lines could denote land, or horizon – the boundary between earth and sky, water and sky, or the borderline between the worlds.

A wavy line or zigzag symbolised the watery element, snake, lizard, or determined a certain border.

But the marks could have multiple meanings for the ancient statue-makers who gave the idol seven faces, only one of which is three-dimensional.

The faces may be images of spirits that inhabited the human world in ancient times.