Lt. Fred Ringwald was the first to see it. He was riding as observer in a night fighter piloted by Lt. Ed Schlueter, with Lt. Donald J. Meiers on radar. It was a late November evening in 1944, partly cloudy with a quarter moon. They were roaming the Rhine Valley just north of Strasbourg on the French-German border when Ringwald said, “I wonder what those lights are, over there in the hills,” according to an American Legion Magazine story on the sightings from 1945. They called them Foo Fighters.

It was nearly the end of World War II. But for the airmen of the 415th Night Fighter Squadron, it felt more like the beginning of War of the Worlds when UFOs and the Foo Fighters appeared.

Before there was the Roswell Incident 1947, UFOs spotted flying at hyper-speed were something well-known to the US government, and they even had a name for them, they called them Foo Fighters. And yes, that’s where the band of the same name got their name from. As you will see in the video below, our government was very aware of these UFOs, and their existence and our interaction with them verified by the testimony of hundreds of WWII-ear airmen. The video contains actual footage and images of the Foo Fighters captured by photographers.

President Franklin Roosevelt wrote several memos about these UFOs, these Foo Fighters, and in fact authorized his generals to conduct whatever tests or experiments they felt necessary to extract information from them as regarding the advancement of US military capabilities to help with the wars we were fighting with Japan and Germany. You will note that within 3 years of that memo, the United States was in possession of the world’s first-ever nuclear weapon whose very existence would terrify nations for the coming decades.

Lastly, it is important to note that appearances of the Foo Fighters, seen in the 21st century as perhaps an antiquated memory of an age passed, are still happening and being recorded by jet pilots today. US Navy pilot Lieutenant Ryan Graves, who flies an F/18 Super Hornet that has a top speed of 1,190 mph, reports seeing objects that he cannot explain that are flying so fast that it makes his plane appear to stand still. More than that, he has observed these UFOs perform maneuvers that his top-level training tells him could not be performed by human beings. And he didn’t just see them appear for a few minutes, it was sometimes as long as 12-hours straight that he watched them fly.

Our government has always known about the Foo Fighters, the UFOs that they cannot explain, and legitimate reports and sightings are absolutely on the rise. Exactly what you would expect of we were actually getting ready to experience the Days Of Noah that Jesus foretold about it.

FROM HISTORY: Lt. Fred Ringwald was the first to see it. He was riding as observer in a night fighter piloted by Lt. Ed Schlueter, with Lt. Donald J. Meiers on radar. It was a late November evening in 1944, partly cloudy with a quarter moon. They were roaming the Rhine Valley just north of Strasbourg on the French-German border when Ringwald said, “I wonder what those lights are, over there in the hills,” according to an American Legion Magazine story on the sightings from 1945.

There were eight to 10 of them in a row, glowing fiery orange. Then Schlueter saw them off his right wing. They checked with Allied ground radar, but they registered nothing. Thinking that the lights might be some kind of German air weapon, Schlueter turn the plane to fight…only to have the lights vanish.

At first the men said nothing, fearing they’d be ostracized. But then the sightings spread through the unit. On December 17, 1944, near Breisach, Germany, a pilot was flying at approximately 800 feet when he saw “5 or 6 flashing red and green lights in ’T’ shape.” The lights seemed to follow him, closing in “to about 8 o’clock and 1,000 ft.” before disappearing as inexplicably as they came. 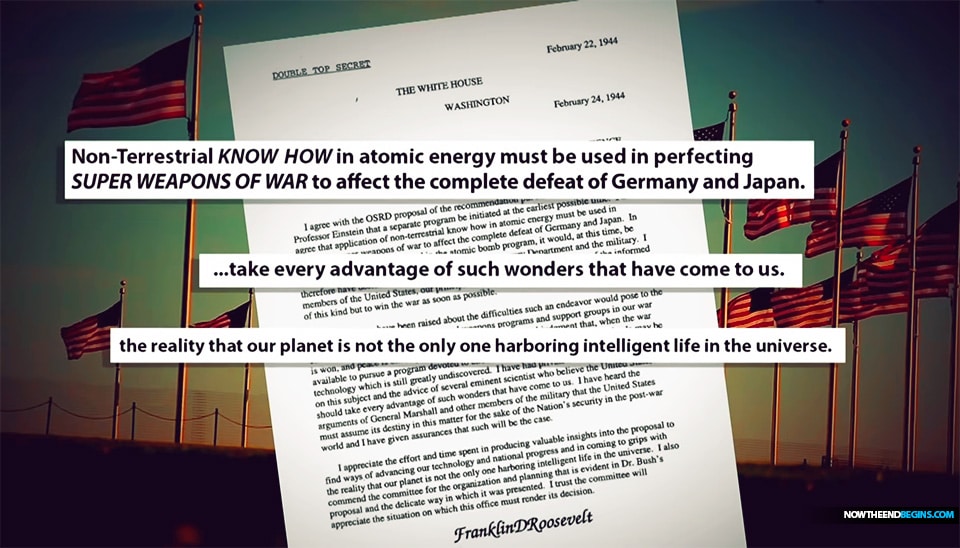 Then on December 22nd, two more flight crews sighted lights. One crew, near Hagenau, reported two lights in a large orange glow, seeming to rise from the earth to 10,000 feet, tailing the fighter “for approximately two minutes.” After that, the lights, “peel off and turn away, fly along level for a few minutes and then go out. They appear to be under perfect control at all times,” according to Keith Chester’s Strange Company: Military Encounters with UFOs in World War II.

And then there was Lt. Samuel A. Krasney’s experience: a wingless cigar-shape object, glowing red, just a few yards off the plane’s wingtip. Lt. Krasney, justifiably spooked, instructed the pilot to attempt evasive maneuvers, but the glowing object stayed right next to the jet for several minutes before it “flew off and disappeared.”

Eventually, the airmen named the lights: foo fighters, inspired by the comic strip “Smokey Stover,” in which Smokey (a firefighter) would often declare, “Where there’s foo, there’s fire.” An Associated Press reporter broke news of the foo-fighter sightings on January 1st, 1945, and theories about their origins quickly abounded: The sightings were flares, or weather balloons or St. Elmo’s Fire—a phenomenon where a light appears on the tips of objects in stormy weather. But the members of the 415th rejected all those theories. Flares and weather balloons can’t track planes like these objects could, and they’d seen St. Elmo’s fire and could distinguish the two.

Then there were those who claimed that the airmen were suffering from “combat fatigue,” a polite way of saying that war stress was driving them insane. But there was scant evidence to suggest collective psychosis: The 415th had an otherwise excellent record, and when a reporter for American Legion Magazine went to report on the squadron he described them as “very normal airmen, whose primary interest was combat, and after that came pin-up girls, poker, doughnuts and the derivatives of the grape.”

Lt. Krasney’s son, Keith Krasney, says his late father didn’t fit the stereotypical profile of a UFO theorizer. In fact, he never even suggested that the glowing wingless cigar-like object that flew next to his plane was extraterrestrial in origin.

“He was very level-headed, very analytical,” says Krasney of his father, adding that he kept a notebook where he wrote about (and drew) his foo-fighter sighting. But although he never seemed prone to conspiracy theories, Krasney says his father was open to one: “He entertained the idea that it could be late-breaking German technology. He did express the view that there were a lot of things during the war that were kept quiet.” READ MORE

Was President Roosevelt In Possession Of Extraterrestrial Technology?

Investigators reveal the secret history of several U.S. Presidents and their connection to the UFO phenomenon. Starting with FDR, researchers examine the startling discoveries of unidentified flying craft facing a president preoccupied by WWII.

As the head of the US Air Force’s official UFOs investigation, Dr. Hynek was supposed to use his classification system to debunk so-called “close encounters.” Instead, he became a true believer.