As The World Prepares For War, Will Obama Blink?

"We are hearing the drums of war," Mr. Moallem added. "They want to attack Syria. I believe to use chemical weapons as a pretext is trite and inaccurate."... 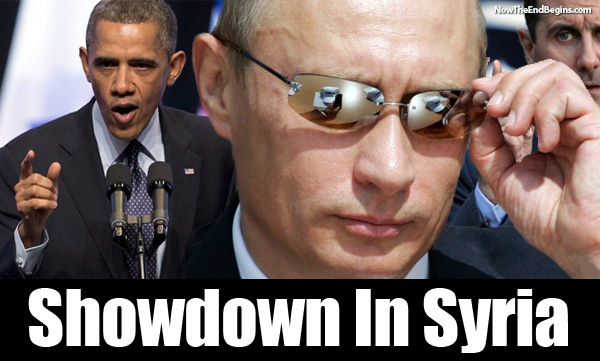 The stakes have never been higher. The current conflict could involve the United States, Syria, Russia, Iran and China. Last time I checked that sounded suspiciously a lot like Psalm 83 and Ezekiel 38 and 39. Could this be the biblical conflict mentioned in prophecy? Time will tell, but one thing is for sure. You need this.

WSJ/DAMASCUS—The Arab League said Tuesday that Damascus had used chemical weapons against its population, and Western governments discussed military responses to the attacks, as Syria’s foreign minister vowed that his country would defend itself against any foreign attack.

French and U.K. military officials held talks with their American counterparts about coordinating their response to alleged chemical attacks last week near Damascus that activists and rebels said left more than 1,000 Syrians dead.

The U.S. is examining ways to attack Syria without the approval of the United Nations, where Russia would likely veto any military action, U.S. and European officials have said. The Obama administration has recently stepped up contacts with North Atlantic Treaty Organization and Arab League allies about supporting a military operation against Damascus.

While the Arab League’s accusation on Tuesday bolstered the U.S. case for military strikes, the group stressed that the perpetrators should be brought to justice in an international forum.

The league “demands that all those involved in this heinous crime be presented for international trials,” according to the statement. The league urged its member states and the international community to issue the necessary “resolutions against the perpetrators of this crime, for which the Syrian regime bears responsibility, and to put an end to the violations and crimes of genocide that the Syrian regime has carried out for over two years.”

The statement came a day after U.S. Secretary of State John Kerry said there was undeniable evidence that chemical weapons had been used in an attack he characterized as a “moral obscenity.” On Tuesday, Vice President Joe Biden said there was “no doubt” that the Assad regime was behind the attack.

“There is no doubt that an essential international norm has been violated,” Mr. Biden said at the American Legion’s annual convention in Houston. “No one doubts that innocent men, women and children have been the victims of chemical weapons attacks in Syria. And there is no doubt who is responsible for this heinous use of chemical weapons in Syria: the Syrian regime.”

U.S. officials have said they expect to release evidence in coming days that Syria’s regime was behind the attacks.

France’s President François Hollande vowed Tuesday to “punish” the regime of Syrian President Bashar al-Assad for what he said was its likely use of chemical weapons in recent attacks near Damascus.

Mr. Hollande, addressing ambassadors at the Élysée Palace, pressed his case for the West to respond to the attack with “necessary force” targeting the Assad regime.

“This mass chemical massacre cannot go unanswered,” he said. “France is ready to punish those who made the horrible decision to gas innocents.”

Syria “utterly and completely” rejects the allegations that it used chemical weapons, Syrian Foreign Minister Walid al-Moallem said Tuesday. He added that Syria would defend itself by means available. “We will surprise others” planning to attack Damascus, he said.

“We are hearing the drums of war,” Mr. Moallem added. “They want to attack Syria. I believe to use chemical weapons as a pretext is trite and inaccurate.” source – WSJ