With Passover Approaching, a Plague of Locusts Descends Upon Egypt

As if we hadn't already seen enough Biblical events this year, a plague of over 30 million locusts swarmed over Egypt's cities and farms just three weeks before Passover... 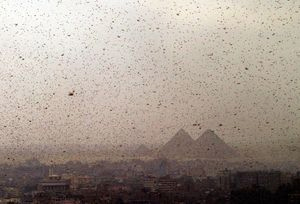 “And the locusts went up over all the land of Egypt, and rested in all the coasts of Egypt: very grievous were they; before them there were no such locusts as they, neither after them shall be such.” Exodus 10:14

As if we hadn’t already seen enough Biblical events this year, a plague of over 30 million locusts swarmed over Egypt’s cities and farms just three weeks before Passover begins.

But put your apocalyptic fears to rest. This happens every year as part of the locusts’ natural migration pattern, though this year’s swarm is especially large.

That doesn’t mean Egyptians aren’t freaked the heck out by millions of nasty bugs buzzing through the air at all hours of day and night, possibly descending upon the agriculture fields where they’re known to destroy entire crops, just like in the actual Passover story.

The crops are so far safe, Egyptian officials assured the public. As the plague made its way from the Red Sea to Saudi Arabia at the end of last week and this weekend, though, Egyptian Agricultural Minister Salah Abdel Moamen explained the situation to the country in a calmly worded statement.

“The current inspection teams at areas targeted by locusts did not witness swarms damaging a single inch of crop,” said Moamen. He added that the locusts are “sexually immature and do not depend on plants for energy since they mainly rely on fat stores.”

That said, these plages can be unpredictable. Egyptian officials didn’t expect the plague to pass by the country’s capital, until Sunday when the locusts unexpectedly arrived in Cairo. The government denied reports that the locusts had started devastating crops as well as a report from United Nations Food and Agriculture Organisation (FAO) that the Ministry of Agriculture cleared 11,000 hectares of land in an attempt to save the harvest. When they get hungry, a one-ton hoard of locusts can eat the same amount of food in one day as 2,500 humans, according to the UN. Egypt knows this too. Less than a decade ago, a plague of locusts nearly 40 miles wide swept over Egypt damaging crops at the majority of the country’s farms. That’s a picture of it, to the right.

Conflicting reports aside, Moamen insists that the government has everything under control. “Egyptian armed forces and the border guards are attempting to fight the swarm with the means at their disposal,” the agriculture minister said. “I ask the families living in the locust-plagued areas not to burn tires. This does not chase away the locusts, but only causes damage and could ignite large scale fires that would cost in lives.” Also, that smoke isn’t doing Egypt’s grandchildren any favors. Scientists anticipate that, as global warming worsens, plagues like this will also get worse. source – The Atlantic Wire