With Blogging at All-time High, Obama’s Washington Seeks to Silence the Internet 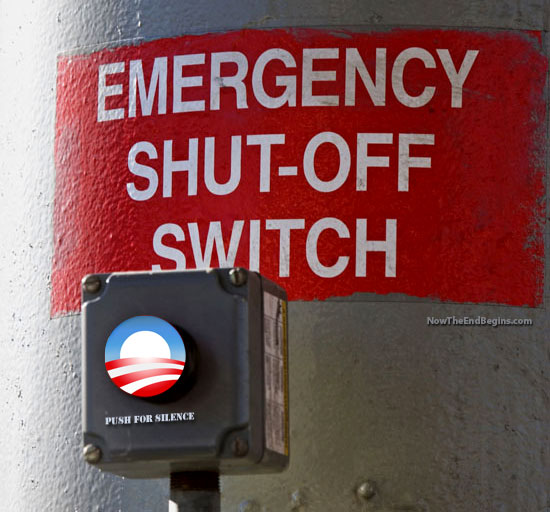 Don't think it can happen? You are fooling yourself very badly. It IS happening.
by Geoffrey Grider December 12, 2011
NOW THE END BEGINS SHARE:

What began as an attempt to restrain foreign piracy on the Internet has morphed into a domestic “kill switch” on First Amendment freedom in the fastest-growing corner of the marketplace of ideas.

Don't think it can happen? You are fooling yourself very badly. It IS happening.

Proposed federal legislation purporting to protect online intellectual property would also impose sweeping new government mandates on internet service providers – a positively Orwellian power grab that would permit the U.S. Justice Department to shut down any internet site it doesn’t like (and cut off its sources of income) on nothing more than a whim.

Under the so-called “Stop Online Piracy Act” (SOPA) the federal government – which is prohibited constitutionally from abridging free speech or depriving its citizens of their property without due process – would engage in both practices on an unprecedented scale. And in establishing the precursor to a taxpayer-funded “thought police,” it would dramatically curtail technology investment and innovation – wreaking havoc on our economy.

Consider this: Under the proposed legislation all that’s required for government to shutdown a specific website is the mere accusation that the site unlawfully featured copyrighted content.  Such an accusation need not be proven – or even accompanied by probable cause. All that an accuser (or competitor) needs to do in order to obtain injunctive relief is point the finger at a website.

Additionally, SOPA would grant regulators the ability to choke off revenue to the owners of these newly classified “rogue” websites by accusing their online advertisers and payment providers as co-conspirators in the alleged “piracy.” Again, no finding of fact would be required – the mere allegation of impropriety is all that’s needed to cut the website’s purse strings.

Who’s vulnerable to this legislation?

“Any website that features user-generated content or that enables cloud-based data storage could end up in its crosshairs,” writes David Sohn, senior policy council at the Center on Democracy and Technology. “(Internet Service Providers) would face new and open-ended obligations to monitor and police user behavior. Payment processors and ad networks would be required to cut off business with any website that rights-holders allege hasn’t done enough to police infringement.” source – The Hill