Why Is Pope Francis Selling The US-Iran Nuclear Agreement On Easter Sunday?

Pope Francis said “In hope we entrust to the merciful Lord the framework recently agreed to in Lausanne, that it may be a definitive step toward a more secure... 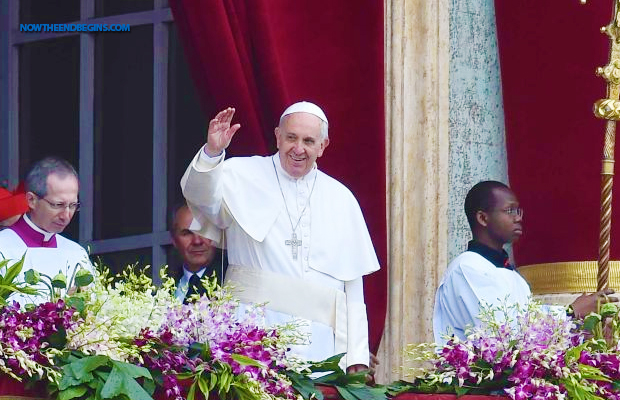 The Catholic Pope claims to be the authorized representative of Jesus Christ here on this earth. The official Catholic Catechism says “For the Roman Pontiff, by reason of his office as Vicar of Christ, and as pastor of the entire Church has full, supreme, and universal power over the whole Church, a power which he can always exercise unhindered.” Wow, that’s a lot of power for one man, for a single human being.

So, and I’m just spit-balling here, you would think that someone with that much spiritual power given to him by Jesus Christ, would be preaching a nearly identical message to that which Jesus preached on the earth. Preaching about Heaven and Hell, repentance, salvation, the coming Kingdom of Heaven and the Kingdom of God, and so on. Right? Wrong.

Pope Francis made his first public comments about the recent framework for an accord, reached in Lausanne, Switzerland, and aimed at ensuring Iran doesn’t develop a nuclear weapon.

“In hope we entrust to the merciful Lord the framework recently agreed to in Lausanne, that it may be a definitive step toward a more secure and fraternal world.”

Pope Francis, in yesterday’s Easter Sunday message, devoted it to preaching the “gospel” of the “great deal” Obama and his minions had made with Iran about curtailing their murderous nuclear ambitions. His message was nearly 100% geo-political in nature and tone, rarely referring to the Scriptures and doing no expository preaching of any kind. Again I ask you, why? I will tell you why.

In the last days, the days we are now living in, the bible says in Revelation 17 that there will be a great combination power that gathers together all spiritual rule over the people as well as all political rule. A one-stop shop, if you will. When the Apostle John was shown this in a vision, he was shocked, dumbfounded, because he knew right away what he was looking at but couldn’t believe what he was seeing.

“And I saw the woman drunken with the blood of the saints, and with the blood of the martyrs of Jesus: and when I saw her, I wondered with great admiration. And the angel said unto me, Wherefore didst thou marvel? I will tell thee the mystery of the woman, and of the beast that carrieth her, which hath the seven heads and ten horns.” Revelation 17:6,7 (KJV)

John is seeing the professing Christian church in the time of the Tribulation, only it is apostate, wicked and filthy from stem to stern. John is seeing the Roman Catholic church, under the rule of the False Prophet and the Antichrist, and exercising complete spiritual and political rule over all the kings of the earth. Now you know why Francis is concerned with politics, the revived Roman Empire is just beginning to open it’s eyes and stretch it’s legs. He is not content with spiritual rule over Catholics, he is beginning the ascent to political rule as well.

Pope Francis has made a political plea for passing of Climate Change legislation, has demanded global redistribution of the world’s wealth, and for the first time in United States history he as Roman Pope will address Congress. Do you see it now, or are your eyes firmly switched to the off position?

The bible continues it description of the Vatican and Roman Catholic church system:

“And here is the mind which hath wisdom. The seven heads are seven mountains, on which the woman sitteth. For God hath put in their hearts to fulfil his will, and to agree, and give their kingdom unto the beast, until the words of God shall be fulfilled. And the woman which thou sawest is that great city, which reigneth over the kings of the earth.” Revelation 17:9,17,18 (KJV)

Just for fun, why don’t you spend your next lazy, rainy afternoon with a cup of coffee and the King James Bible. Read Revelation chapters 17 and 18 in their entirety, pray over them and ask the Holy Spirit to open your eyes to the truth. Those two chapters describe in great detail the Vatican, the Catholic Church, and the revived Roman Empire.

Who else do you know whose colors are purple and scarlet, who holds a golden chalice, who claims spiritual rule over the whole world, and whose headquarters sits on 7 mountains or hills?  All that and more are right there in Revelation 17 and 18 in the KJV.

“For there shall arise false Christs, and false prophets, and shall shew great signs and wonders; insomuch that, if it were possible, they shall deceive the very elect. Behold, I have told you before.” Matthew 24:24,25 (KJV)