Who Is Behind The Arab Spring-Style American Protests That Have Mysteriously Started?

New York City police are bracing for a weekend of mayhem in lower Manhattan with thousands expected to risk arrest as the Occupy Wall Street protest moves into its... 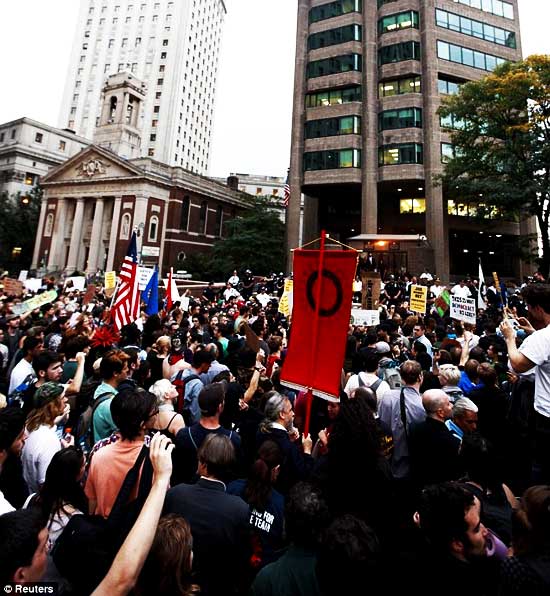 Just a guess, mind you, but I’m betting that it’s Obama, Soros…and the Muslim Brotherhood.

“New York City police are bracing for a weekend of mayhem in lower Manhattan with thousands expected to risk arrest as the Occupy Wall Street protest moves into its third straight week.

United: Demonstrators from the Occupy Wall Street campaign sit in the plaza in front of the New York Police Department headquarters on Friday

More than 1,000 demonstrators speaking out against corporate greed and social inequality took their protest to the New York Police Department (NYPD) headquarters yesterday.

The Occupy Wall Street protesters camping out in lower Manhattan marched several blocks north yesterday and demonstrated there for about two hours against the police response to the downtown protest, which is in its second week.

Critics have accused officers of being heavy-handed, saying they have roughed up people who did nothing wrong, the NYPD has disputed that claim. Protesters also say they’re upset about reports from The Associated Press that an NYPD intelligence unit has sought to infiltrate the city’s Muslim community.

The movement, whose members have vowed to stay through the winter, are protesting issues including the 2008 bank bailouts, foreclosures and high unemployment. And the increasing presence of more affluent-looking demonstrators is fuelling questions over whether this is the moment a frustrated middle America is uniting for a national uprising.

The protest encampment in Zuccotti Park in downtown Manhattan is festooned with placards and anti-Wall Street slogans. There is a makeshift kitchen and library, and celebrities from filmmaker Michael Moore to actress Susan Sarandon have stopped by to show solidarity. Grungy youths sleeping on the street, topless women waving signs stating ‘I love this country’, and ageing hippies have won their share of national headlines for their cries of rebellion.

But among these protesters are also men wearing suits and mothers who have driven in from the suburbs.

Julien Harrison, an aspiring teacher, was among the frustrated masses, travelling from Portland, Maine to voice his frustration. Mr Harrison, who said his student debt amounts to $50,000, has only been able to find only manual labour since getting his master’s degree.

He told VOA News: ‘Of course, they’re laying off teachers all over the country,’ he said. ‘It’s getting more and more competitive. I just came from Portland. There’s people with Ph.Ds, masters, undergraduate degrees competing to be a barista at a coffee shop.’ source – Daily Mail UK