Barack Obama smirked and laughed as a reporter at his Wednesday briefing after getting a critical question about the nuclear deal with Iran. CBS News's Major Garrett pressed the... 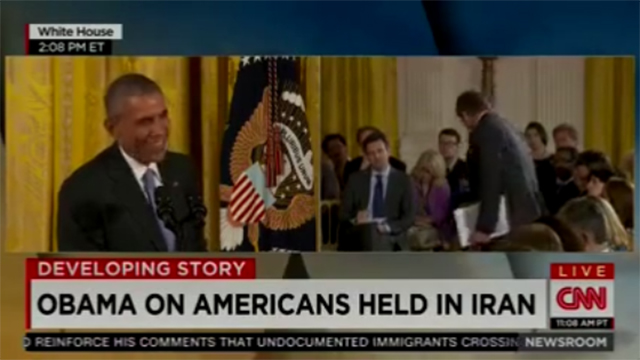 Barack Obama smirked and laughed as a reporter at his Wednesday briefing after getting a critical question about the nuclear deal with Iran. CBS News’s Major Garrett pressed the president on the imprisonment of Americans in Iran.

EDITOR’S NOTE: I am not a body language expert or a speech pathologist, but get a load of how Obama reacts when confronted by Major Garrett from CBS News.. Garrett opens his mouth and nails Obama on the phony Iran nuke deal and on the 4 American hostages. Obama reacts by smirking, laughing and stumbling for a response as all liars will do.

“As you well know, there are four Americans in Iran—three held on trumped-up charges, according to your administration, one whereabouts unknown. Can you tell the country, sir, why you are content, with all the fanfare around this deal, to leave the conscience of this nation, this strength of this nation, unaccounted for in relation to these four Americans?” Garrett asked.

“I’ve gotta give you credit, Major, for how you craft those questions,” Obama responded with a smirk. “The notion that I am content as I celebrate, with American citizens languishing in Iranian jails…”

The president’s voice trailed off before he continued. “Major, that’s nonsense, and you should know better,” Obama said. source

The really funny thing is that our Liar-in-chief Obama wants us to actually believe he has successfully negotiated a deal to stop Iran nuclear weapons and at the SAME TIME is unable to get 4 prisoners set free? Are you kidding me? That’s like asking me to believe that someone can build a rocket ship but is unable to repair a bicycle.

Is America really this stupid in 2015? Are we all so brain-dead that we are unable to discern what we are seeing as our president lies right to our faces yet again?