Obama now knows he cannot win on a legit vote, so he must employ a series of dirty tricks to make sure he retains his stranglehold on the Oval... 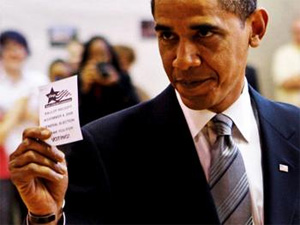 Obama now knows he cannot win on a legit vote, so he must employ a series of dirty tricks to make sure he retains his stranglehold on the Oval Office. His greatest defenders – the liberal news media – are now beginning to forecast myriad grave and perhaps fatal problems with this election. Be prepared for anything tomorrow…

With more than 90 million Americans expected to cast their ballots on Tuesday, election officials across the country are bracing for what some  fear will be a “perfect storm” of election day problems that could result in tense confrontations at polling stations and a rush to the courthouse to file legal challenges.

The list of actual and potential problems is unusually long this year, ranging from concerns about machine failures to confusion over new rules governing voter ID and provisional ballots.

Another big wild card: the impact of groups such as “True the Vote,” a Tea Party off-shoot, that is vowing to swarm polling places with an army of hundreds of thousands of  “citizen” poll watchers to look for fraud and challenge ineligible voters.

It’s a threat that civil rights groups are vowing to fight with their own rival armies of poll watchers — to “monitor the monitors,” says one activist.

“Our election system has probably never been under as much strain as it is right now — anything that can go wrong, probably will go wrong,” said Victoria Bassetti, a former Senate Judiciary Committee counsel and the author of the new book, “Electoral Dysfunction: A Survival Manual for American Voters.”

Bassetti notes that the camps backing both President Barack Obama and Republican nominee Mitt Romney have “pre-positioned their legal assets” by deploying thousands of volunteer lawyers to battleground states in order to challenge decisions by election supervisors, in court if necessary.

In Florida, the litigation is already heating up. On Sunday, the Florida Democratic Party filed emergency lawsuits to extend early voting — challenging  GOP governor Rick Scott’s refusal to do so — after some voters were stuck in lines for up to six hours trying to meet Saturday’s deadline for early ballots. When the Miami Dade election office reopened to allow in-person absentee balloting, and then temporarily shut it down, frustrated voters started shouting, “Let Us Vote! Let Us Vote!”–  stirred up by a man wearing an Obama campaign tee shirt.

It could be a preview of what happens Tuesday. “We can expect lots of yelling and screaming- and lawsuits,” said Bassetti.

The upshot is that, if the voting is as close as some (but not all) polls suggest, the winner of the presidential election may not be known for days, if not weeks, after Election Day. “We’re going to be  in sudden death overtime,” predicts John Fund, a former Wall Street Journal editorial writer and the co-author of “Who’s Counting: How Fraudsters and Bureaucrats Put Your Vote at Risk.”

To be sure, disputes about voting are hardly new — and some of the potential problems most frequently cited by advocates on both sides of the political fence could prove to be overblown.

But experts interviewed by NBC News identified a number of so-called “nightmare scenarios” that could complicate the counting of returns on Tuesday.

Here’s a look at four of those scenarios:

1) The national vote count for president is thrown into doubt because of the impact of Hurricane Sandy.

The devastation wrought by Hurricane Sandy in the Northeast appears likely to hold down vote totals in the region. In New Jersey, hundreds of polling stations may be without power — late last week nearly half of the 240 locations in Hudson County were out of commission and officials are scrambling to find alternatives.

On Saturday, Gov. Chris Christie’s administration announced that it will allow voters to download ballots off a state Website and return them by e-mail — a system that some experts have warned could lead to tampering by hackers. (A voting group called the Verified Voting Foundation has repeatedly warned about the security risks from Internet voting.)

On Thursday, the state’s lieutenant governor, Kim Guardagno, said the state will deploy Defense Department trucks with “Vote Here” signs, protected by National Guard members. But that plan prompted concerns among some Democrats that military trucks could intimidate voters, especially in minority neighborhoods, and there were signs over the weekend that officials may be backing away from it.

“Obviously, this is uncharted water for us — getting hit with this at this late date just before a huge election,” said Michael Harper, the clerk of elections in New Jersey’s Hudson County, during a tour of damaged and flooded polling stations on Saturday.

While the hardest hit states like New Jersey, New York, and Connecticut are all considered reliably Democratic and safely in the Obama column, the aftermath of the hurricane could affect the president’s total national vote counts — and raise questions about his mandate or even legitimacy if he loses the popular vote but wins the Electoral College (just as some Democrats questioned President George W. Bush’s legitimacy after he lost the popular vote in 2000.)

The situation appears most acute in Ohio, a crucial battleground, where some experts have warned about a counting disaster stemming from what are expected to be as many as 200,000 provisional ballots.

The background: in an effort to impose uniformity, GOP Secretary  of State Jon Husted over the summer directed that absentee ballot applications be mailed out to all of the state’s 6.9 million registered voters — regardless of whether they had asked for them or not.

About 1.3 million voters filled out those applications and received absentee ballots in the mail. But as of this weekend, 238,678 voters who got absentee ballots had not returned them. If those voters don’t return their ballots by mail by tomorrow and try to go to the polls on Tuesday instead, they along with others whose eligibility could be questioned or who show up at the wrong polling station, will have to cast provisional ballots to make sure they haven’t vote twice.  And under Ohio law, those ballots can’t even be counted until Nov. 16, ten days after Election Day.

“There’s a realistic chance that we will not know which candidate won the presidential election in Ohio because of the existence of provisional ballots, that we will be in overtime,” said Edward Foley, an election law expert and professor of law at Ohio State University.

The issue intensified on Friday when Husted issued a new directive that puts the burden on voters, rather than poll workers, to properly fill out a form recording what ID was presented for provisional ballots — and instructing election boards to throw out provisional ballots if the forms are incomplete or contain any mistakes. The directive has triggered a last minute law suit by voting rights groups, increasing the likelihood of disputes over the counting of provisional ballots in a pivotal battleground state.

3) Disputes over ballot printing errors, machine errors, and a lack of paper trail could bog down the counting in other battleground states.

This problem has already arisen in Florida. About 27,000 absentee ballots in Palm Beach County, Florida — famous for its “butterfly” ballots and hanging chads during the 2000 Florida recount — can’t be read by voting machines because of a printing error. This forced election officials last week to begin the arduous process of hand-copying those ballots in order to feed them into the machines — while lawyers from both sides looked on, raising challenges.

An exasperated Susan Bucher, the country’s election supervisor, was caught on camera admonishing lawyers over what she termed “frivolous” objections and threatening to eject them.

But questions about machine failures are far broader than that. Last week, lawyers for the Republican National Committee wrote letters to attorneys general in six states asking for investigations after receiving reports that some voters had complained that machines had recorded their votes for Mitt Romney as being for Obama.

Moreover, sixteen states — including Virginia and Pennsylvania — rely to some extent on touch screen voting machines that leave no paper trail that can be verified during a recount.

Two voting experts warned on Saturday “we risk catastrophe” if recounts are required in Virginia and Pennsylvania “because most of their votes will be cast on paperless voting machines that are impossible to recount.”

4) Legions of citizen poll watchers on both sides create confusion and even chaos at some polling stations.

“True the Vote,” the Texas-based Tea Party inspired group, has launched an aggressive national effort to root out vote fraud, providing  training videos and  computer software (that contain data on property records and death indexes) to help volunteers identify ineligible voters who show up at the polls on Tuesday.

Hans Von Spakovsky, a former Federal Election Commissioner who serves as one of the group’s advisers, defends the effort, telling NBC News that in a close election “any bogus vote” needs to be stopped. “Anytime you have a close election, a small amount of fraud could make the difference.”

But voting rights groups say “True the Vote” and its affiliates threaten to intimidate legitimate voters — a prospect they aim to combat with their own battalions of citizen poll watchers on Tuesday.

Judith Browne Dianas, co-director of the “Advancement Project,” a civil rights group, says her organization has lined up thousands of lawyers and poll watchers in 20 key states to look for “suspicious activity” by True the Vote and its affiliates. “We will also be watching the poll watchers making sure they aren’t acting as bullies,” she says. source – NBC News