The New York Times reported the Presbyterian Church (U.S.A.) voted on Friday at its general convention to divest from three companies that it says supply Israel with equipment used... 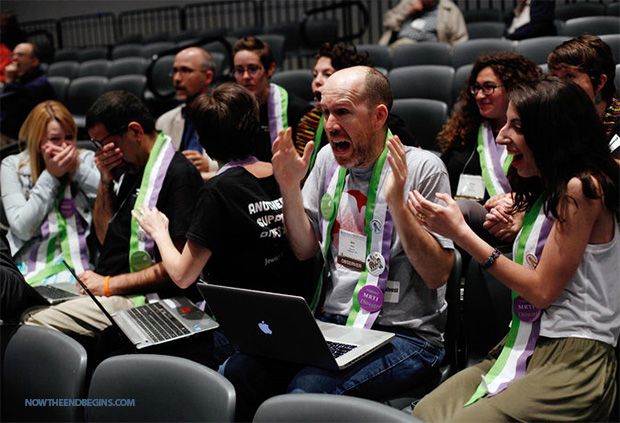 And I will bless them that bless thee, and curse him that curseth thee

The New York Times reported the Presbyterian Church (U.S.A.) voted on Friday at its general convention to divest from three companies that it says supply Israel with equipment used in the occupation of Palestinian territory.

Robert Ross, center, and other observers in Detroit after the Presbyterian Church (U.S.A.) voted Friday to approve divestment. Credit Joshua Lott for The New York Times

The vote, by a count of 310 to 303, was watched closely in Washington and Jerusalem and by Palestinians as a sign of momentum for a movement to pressure Israel to stop building settlements in the West Bank and East Jerusalem and to end the occupation, with a campaign known as B.D.S., for Boycott, Divestment and Sanctions.

The Presbyterian Church is just one of many once-mainstream Christian denominations that have turned their back on Israel, and demand that her land be parted and given to the Palestinians. By aligning themselves with the highly anti-semitic Boycott-Divestment-Sanctions campaign movement, they have shown themselves to the enemy of the state of Israel, regardless of whatever else they may say in an attempt to downplay their hatred.

A Myth Called The Palestinian People from Now The End Begins on Vimeo.

MEMO TO THE PRESBYTERIAN CHURCH: All of Israel is God’s land, and has been given to the Jews. Not one square inch of it belongs to the mythical Palestinians or anyone else. Your denomination is finished by your own hands, by your own choices. Mene, Mene, Tekel, Upharshin.