“Now let’s make two things clear: ISIL is not Islamic,” Obama said, speaking from the state floor of the White House residence. “No religion condones the killing of innocents,... 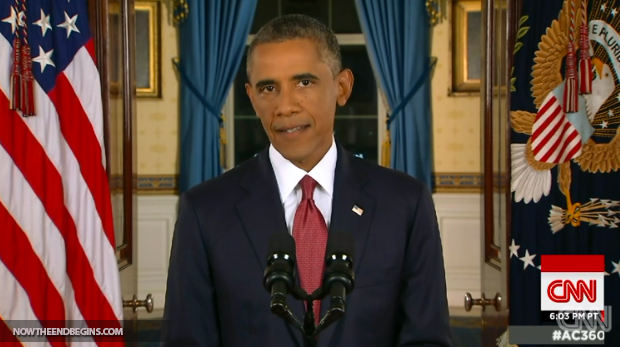 Every time he gives a speech, I always wonder just whose president he really is

In what was supposed to be a “red meat” speech to comfort Americans that our government is working hard to keep us safe and protected, Obama’s first words out of his mouth were an aggravated, impassioned defense of Islam as a ‘religion of peace‘. Seriously, could it get any worse?

In his prime-time speech to the nation on the eve of the 13th anniversary of the Sept. 11 terror attacks, President Obama made a particular point of declaring that the Islamic State terrorists “are not Islamic.”

“Now let’s make two things clear: ISIL is not Islamic,” Obama said, speaking from the state floor of the White House residence. “No religion condones the killing of innocents, and the vast majority of ISIL’s victims have been Muslim.”

He added, “And ISIL is certainly not a state. It was formerly al-Qaida’s affiliate in Iraq, and has taken advantage of sectarian strife and Syria’s civil war to gain territory on both sides of the Iraq-Syrian border. It is recognized by no government, nor the people it subjugates. ISIL is a terrorist organization, pure and simple. And it has no vision other than the slaughter of all who stand in its way.”