As a nation, we have completely lost our way. It's time to feel shame to be called an American for allow him to rule over us. I do not... 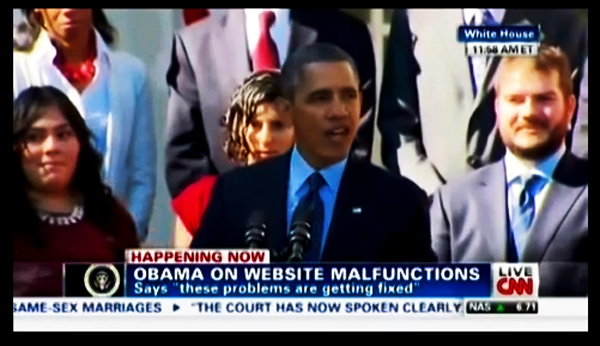 As a nation, we have completely lost our way. It’s time to feel shame to be called an American for allowing him to rule over us. I do not recognize what this country has become.

When you know what to look for in this video, you can actually see them signal each other right up to the very moment when the ‘faint’ begins to happen. Honestly, how anyone can stand to have this usurper, this occupier, sitting in the seat reserved for the president of the United States of America is beyond my ability to comprehend it.

Lady Patriot: For some strange reason, Obama has to have props around him when he does one of his con-jobs in the Rose Garden, or wherever he chooses to receive his worshipers. This was no different, except that he had animated props this time. Although it was well staged there were enough holes in this little scene to drive the proverbial truck through.

It is obvious that there are quite a few people involved in this latest fraud put out by the White House. Why did Obama think it was necessary to “catch” a fainting woman just when he said the words, “To free families from the pervasive fear that one illness….” And down she went? Well not actually down. She just weaved and wobbled a little and never quite fainted. And, consequently, Obama never actually caught her. He turned around and put his hand on her shoulder as if to steady her and turned back to the camera to make sure it got a clear shot of his “rescue” efforts.

You will see in the following video that the pregnant woman is standing with a friend who is holding her hand with her arm wrapped around her waist. That is until she starts to “faint”. Then she steps slightly aside and never even looks at the women she is holding. She smiles a nervous smile for the camera because she has done her part in this extremely poorly orchestrated drama.

Why would they come up with this transparent attempt to manipulate the low information voters? Who knows? Did it make anyone feel warm and fuzzy for our hero President? Probably. There are a lot of idiots out there. Did it take the focus off the disastrous website? I don’t think so. Whatever the reason was that Obama and his advisers had to dream up this silly scheme it certainly smacks of desperation. If I was him I would fire them all. But, who knows? As stupid as this idea was, it could have been his. Maybe he’ll fire himself. source – Lady Patriots