Vatican Says The Catholic Church Is The Only True Church

In 2007, Pope Benedict XVI has reasserted the universal primacy of the Roman Catholic Church, approving a document released Tuesday that says Orthodox churches were defective and that other... 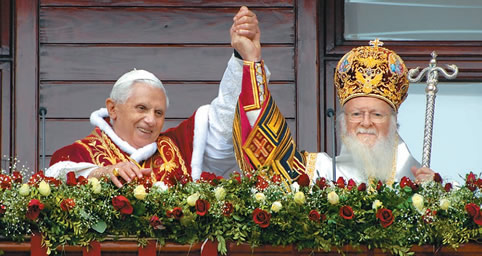 Vatican upholds herself as the ONLY “true” church of Jesus Christ

“And it was given unto him to make war with the saints, and to overcome them: and power was given him over all kindreds, and tongues, and nations. And all that dwell upon the earth shall worship him, whose names are not written in the book of life of the Lamb slain from the foundation of the world.” (Revelation 13:7-8, KJV) 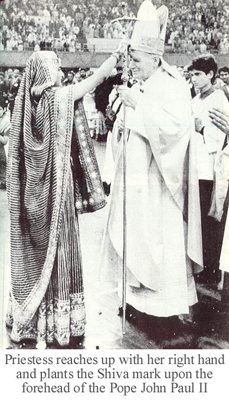 Pope recieves the mark of the Hindu God Shiva.

As we see the signs of time rapidly enfolding before us today, it becomes more clear that the enemy’s plan has long been played out by those in their camp. Puzzle pieces of Bible prophecies that are falling into place today have long been made ready by those who will be in the picture in the End Times.

In 2007, Pope Benedict XVI has reasserted the universal primacy of the Roman Catholic Church, approving a document released Tuesday that says Orthodox churches were defective and that other Christian denominations were not true churches.

Benedict approved a document from his old offices at the Congregation for the Doctrine of the Faith that restates church teaching on relations with other Christians.

It was the second time in a week the pope has corrected what he says are erroneous interpretations of the Second Vatican Council, the 1962-65 meetings that modernized the church.

Formulated as five questions and answers, the document is titled “Responses to Some Questions Regarding Certain Aspects of the Doctrine on the Church.”

It says although Orthodox churches are true churches, they are defective because they do not recognize the primacy of the Pope.

“It follows that these separated churches and communities, though we believe they suffer from defects, are deprived neither of significance nor importance in the mystery of salvation,” it said.

The document adds that Protestant denominations — called Christian Communities born out of the Reformation — are not true churches, but ecclesial communities.

“These ecclesial communities which, specifically because of the absence of the sacramental priesthood … cannot, according to Catholic doctrine, be called ‘churches’ in the proper sense,” it said.

The document is similar to one written in 2000 by the Pope — who was Cardinal Joseph Ratzinger at the time — that sparked an angry reaction from Protestant groups.

“I suspect there will be some reactions that are rather passionate,” said Raphaela Schmid, director of the Becket Institute, a group that advocates religious freedom. “I hope they will not be angry because we all try to understand about each other.”

The document is issued by Benedict’s successor in doctrinal matters, Cardinal William Levada, and endorsed by the Pope, said Reuters.

The Rev. Sara MacVane of the Anglican Centre in Rome, said there was nothing new in the document.

“I don’t know what motivated it at this time,” she said. “But it’s important always to point out that there’s the official position and there’s the huge amount of friendship and fellowship and worshipping together that goes on at all levels, certainly between Anglican and Catholics and all the other groups and Catholics.”

The document said Orthodox churches were indeed “churches” because they have apostolic succession and that they enjoyed “many elements of sanctification and of truth.” But it said they lack something because they do not recognize the primacy of the pope — a defect, or a “wound” that harmed them, it said.

“This is obviously not compatible with the doctrine of primacy which, according to the Catholic faith, is an ‘internal constitutive principle’ of the very existence of a particular church,” the commentary said.

Despite the harsh tone of the document, it stresses that Benedict remains committed to ecumenical dialogue.

“However, if such dialogue is to be truly constructive, it must involve not just the mutual openness of the participants but also fidelity to the identity of the Catholic faith,” the commentary said. 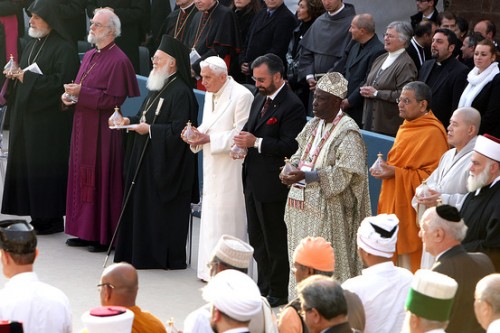 Father Augustine Di Noia, undersecretary for the Congregation for the Doctrine of the Faith, said the document did not alter the commitment for ecumenical dialogue, but aimed to assert Catholic identity in those talks.

“The Church is not backtracking on ecumenical commitment,” Di Noia told Vatican radio.

“But, as you know, it is fundamental to any kind of dialogue that the participants are clear about their own identity. That is, dialogue cannot be an occasion to accommodate or soften what you actually understand yourself to be.”