Pope Francis ascension as political player has been well-received and it appears that he will be limited only by his own ambition. Which, at the moment, appears to... 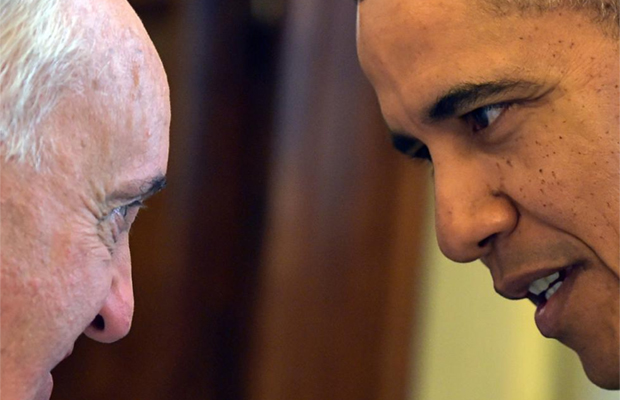 “For what is a man profited, if he shall gain the whole world, and lose his own soul? or what shall a man give in exchange for his soul?” Matthew 16:26

In 2014, Pope Francis emerged as a hard-core political player, using the Vatican to conduct secret meetings between the US and Cuba which led to an unprecedented new partnership between the two nations. In 2015, the pope will again attempt to influence events by being the keynote speaker at the United Nations Global Warming conference in Paris.

The Washington Times reports that “for Mr. Obama and fellow Democrats, aligning with Pope Francis offers clear benefits in the short term, as they are able to highlight agreement on controversial issues with one of the most respected figures on the planet.”

While pretending to oppose them, the Catholic Church has long been a supporter of Socialist and Communist regimes in South and Central American countries, something that is very appealing to an Alinsky Marxist community organizer like Barack Obama. Getting the United States to re-open ties with Communist Cuba was a huge win for the Vatican, and will greatly help to advance their agenda. Having Obama submit to the Vatican’s leading is a great portend of things to come.

The pope also has wealth redistribution on his radar of goals to accomplish, and in 2014 gave repeated sermons on the need for nations to end income inequality. Obama has said many times that he is a strong proponent of wealth redistribution. Social entitlements under his presidency have skyrocketed. Social justice, wealth redistribution, economic inequality are all Socialist-Marxist ideals. So a political alliance between Francis and Obama seems like it would be a match made in….well, not Heaven. But a match nonetheless.

Papal Rome is well on the way to regaining the political power they once held on the world stage in glory days of the Roman Empire. Pope Francis ascension as political player has been well-received and it appears that he will be limited only by his own ambition. Which, at the moment, appears to be limitless.

The crown jewel in Pope Francis political ambitions is, however, nothing less than to be the architect of the coming 7 Year Peace Treaty between Israel and the Muslims. But if he is destined to play the role of the False Prophet, he will need his “boss”, the Antichrist, to arrive on the world stage as well.