“We Catholics cannot speak about the Promised Land for the Jewish people”, the synod’s document said. “There is no longer a chosen people. The concept of the promised land... 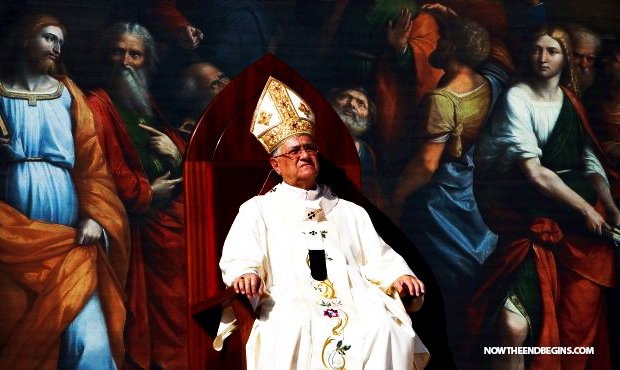 Vatican says Israel’s existence as Jewish state has nothing to do with the Bible.

DISCLAIMER: When the Vatican uses phrases such as “we Christians”, NTEB goes on record as saying that we are not part of whatever group it is they are referring to. The bible says that real Christians are to love the Jewish people and to pray for the peace of Jerusalem. NTEB whole-heartedly supports the Jewish people and the literal, visible, physical, modern-day nation of Israel.

From YNET NEWS: In a special interview with Die Tagespost last week, Latin Patriarch of Jerusalem Fouad Twal, named by Pope Benedict to represent the Vatican in the Jewish State, declared that “Israel’s existence as such has nothing to do with the Bible.” He then compared Christians’ condition in today’s Jerusalem with Jesus’ Passion: “We Christians never forget that even our Lord himself suffered and was mocked in Jerusalem.”

Latin Patriarch of Jerusalem Fouad Twal, named by Pope Benedict to represent the Vatican in the Jewish State

“We Christians cannot speak about the Promised Land for the Jewish people”, the synod’s document said. “There is no longer a chosen people. The concept of the promised land cannot be used as a base for the justification of the return of Jews to Israel and the displacement of Palestinians.”

Twal’s position on Israel and the Bible has been embraced at the highest levels in the Catholic Church. The Vatican synod in 2010 declared that Israel cannot use the Biblical concept of a promised land or a chosen people.

A few days ago, Patriarch Twal responded enthusiastically to the agreement reached between Hamas and Fatah. He also denounced “the Judaization of Jerusalem” and attacked Israel for “trying to transform it into an only Hebrew-Jewish city, excluding the other faiths.” Elsewhere, Iraq’s Archbishop, Louis Sako, asked to “separate between Judaism and Zionism.” Indeed, in the most influential quarters of Christianity, Jews are still regarded as an apostate group not entitled to a sovereign state of its own.

Jesus, the Palestinian prince of hope and peace?

Backed by the Catholic clergy, for the first time in history the Palestinians asked the United Nations’ cultural body to register Bethlehem’s Church of the Nativity under the name of “Palestine.” According to Omar Awadallah, who heads the UN department in the PA Foreign Ministry,

“Jesus is the Palestinian prince of hope and peace and Christians all over the world want that church to be a World Heritage site.”

In a period when the Vatican’s anguish at the catastrophic decline of Arab Christianity should be palpable, the Catholic Church chooses to demonize Israel and to increase its collaboration with the PLO.

The confirmation comes from the intensity of high profile meetings in recent weeks and the participation of bishops not only from Arab countries, but from Europe and the United States as well.

Elimination of Jewish state has become a priority

Last January, eight Catholic bishops from Europe and North America, including UK Archbishop Patrick Kelly and French Archbishop Michel Dubost, visited Gaza. “I asked prisoners in the largest prison in Europe (in Evry) to pray for you,” Dubost told Gazans. The inference was clear: Palestinians are living in a big prison terrified by Israel. In the same period, Father Manuel Musalam, head of Gaza’s Catholics, met with Hamas leader, Mahmoud al Zahar, and declared that “Christians are not threatened by Muslims” but that everyone faces the same problem, that of Israel’s “humiliation.”

The Vatican’s criminalization of Zionism, which Arab Churches made a basic condition for Muslim-Christian rapprochement, grants the elimination of the Jewish State priority over defending the rights of their own beleaguered communities. After Arab nationalism failed to eliminate Israel, Arab Christianity and the Vatican are now building a Palestinian identity hostile to Israel and the Jews. source – YNET News