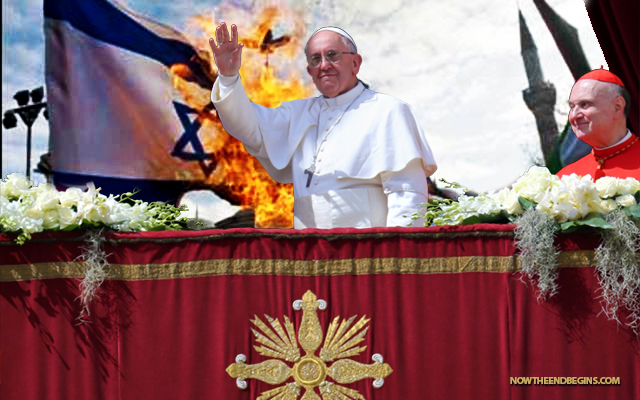 VATICAN WELCOMES IRAN DEAL, PRESSURES ISRAEL TO GIVE UP NUKES

“And upon her forehead was a name written, MYSTERY, BABYLON THE GREAT, THE MOTHER OF HARLOTS AND ABOMINATIONS OF THE EARTH. And I saw the woman drunken with the blood of the saints, and with the blood of the martyrs of Jesus: and when I saw her, I wondered with great admiration.” Revelation 17:5,6 (KJV)

EDITOR’S NOTE: On September 23rd, Pope Francis will meet with US President Barack Hussein Obama at the White House to discuss global wealth redistribution, increasing illegal immigration and how many billions to spend on Climate Change. The Pope will also discuss the best way to disarm Israel and make Iran a nuclear power at the same time.

The Vatican released a statement Tuesday officially welcoming the nuclear agreement between the P5+1 world powers (U.S., UK, China, France, Russia, Germany) and Iran, stating that the Holy See believes Tehran will reduce its nuclear capabilities in exchange for sanctions relief. In calling for a Middle East free of nuclear weapons, the Vatican also appeared to target Israel, given that it is the lone nuclear power in the region.

The Vatican “values positively this agreement because it considers that the way to resolve disputes and difficulties should always be that of dialogue and negotiation,” Archbishop Paul Gallagher said in a statement.

It is clear that the agreement requires further efforts and commitment by all the parties involved in order for it to bear fruit. We hope that the full implementation of [the nuclear deal] will ensure the peaceful nature of Iran’s nuclear program under the [Nuclear Non-Proliferation Treaty] and will be a definitive step toward greater stability and security in the region.

In his address calling for a worldwide reduction of nuclear weapons, Archbishop Gallagher added that “spending on nuclear weapons squanders the wealth of nations” and said that “the dubious strategic rationales for maintaining and even strengthening” nuclear stockpiles are “morally problematic.”

Gallagher added, “How are these expenditures consistent with progress towards nuclear disarmament?” The Holy See “has no illusions about the challenges involved in achieving a world free of nuclear weapons,” he admitted, but called for “concerted steps” for all nations to disarm.

Gallagher also appeared to single out Israel in calling for “the establishment of zones free of nuclear weapons … especially in the Middle East.” Since 1963, the Vatican has opposed the possession of nuclear weapons, Newsweek reports.

The news about the Vatican’s pro-Iran deal position comes as Pope Francis is set to visit Washington, D.C., on September 22. He will then be welcomed to the White House by President Obama on the 23rd. On the 24th, he is set to address a joint session of the U.S. Congress. source