US Walks Out As Iran Delivers Anti-US Speech 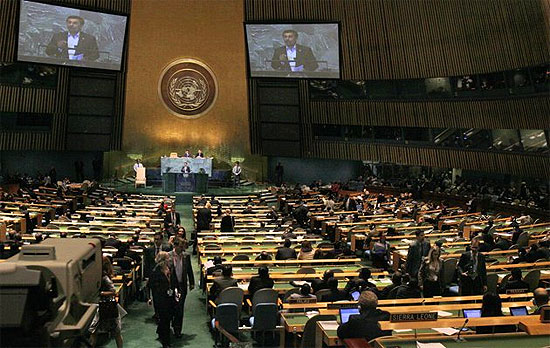 The two U.S. diplomats, who specialize in the Middle East, were followed out of the chamber by diplomats from more than 30 countries. They included the 27 European Union members, Australia, New Zealand, Somalia, Liechtenstein, Monaco, San Marino and Macedonia, a U.N. diplomat said.

Ahmadinejad’s speech contrasted what he called the poverty and unhappiness in most countries against the riches and power of the U.S. and unnamed European nations that he accused of perpetuating wars, causing the current global economic crisis and infringing on “the rights and sovereignty of nations.”

He attacked the United States and European colonial powers for abducting tens of millions of Africans and making them slaves, for their readiness “to drop thousands of bombs on other countries,” and for dominating the U.N. Security Council He singled out the U.S. for using a nuclear bomb against Japan in World War II and imposing and supporting military dictatorships and totalitarian regimes in Asia, Africa and Latin America.

“It is as lucid as daylight that the same slave masters and colonial powers that once instigated the two world wars have caused widespread misery and disorder with far-reaching effects across the globe since then,” Ahmadinejad said. “Do these arrogant powers really have the competence and ability to run or govern the world?”

The Iranian president answered by calling for “the shared and collective management of the world in order to put an end to the present disorders, tyranny and discriminations worldwide.”

Ahmadinejad made no mention of his disputed re-election in June 2009 when Iranian security forces systematically crushed opposition protests, the current internal political turmoil that has sharply diminished his power, or Iran’s nuclear program which the U.S. and its allies believe is aimed at producing nuclear weapons.

“While President Ahmadinejad is lecturing the world from the U.N. podium,” Human Rights Watch’s U.N. Director Philippe Bolopion said, “dissent is still being crushed ruthlessly in Iran and basic rights demanded by millions in the Arab world are brutally denied to Iranians who are demanding the same.”

“The world assembly should take with a grain of salt the remarks of a leader who said nothing about the public hanging yesterday of a 17-year-old in his own country,” he said.

In his speech, Ahmadinejad noted “the widespread awakening in Islamic lands … (in) the pursuit of the realization of justice, freedom and the creation of a better tomorrow.” He said “our great nation stands ready to join hands with other nations to march on this beautiful path.”

The Iranian leader accused the U.S. of threatening to place sanctions on anyone who questions the Holocaust and the Sept. 11, 2001, terrorist attacks against the United States with sanctions and military action.

Without naming the United States, he asked: “Who imposed, through deceits and hypocrisy, the Zionism and over 60 years of war, homelessness, terror and mass murder on the Palestinian people and on countries in the region?”

Ahmadinejad accused some unidentified European countries of still using the Holocaust “as the excuse to pay fine or ransom to the Zionists.” He also said any question about the foundation of Zionism is condemned by the U.S. “as an unforgivable sin.”

Mark Kornblau, spokesman for the U.S. Mission to the United Nations, said: “Mr. Ahmadinejad had a chance to address his own people’s aspirations for freedom and dignity, but instead he again turned to abhorrent anti-Semitic slurs and despicable conspiracy theories.”

When the idea of an independent fact-finding investigation of “the hidden elements” involved in the Sept. 11 attacks was raised last year, he said, “my country and myself came under pressure and threat by the government of the United States.”

“Instead of assigning a fact-finding team, they killed the main perpetrator and threw his body into the sea,” Ahmadinejad said, referring to the U.S. military’s killing of al-Qaida leader Osama bin Laden in early May. source – Yahoo News