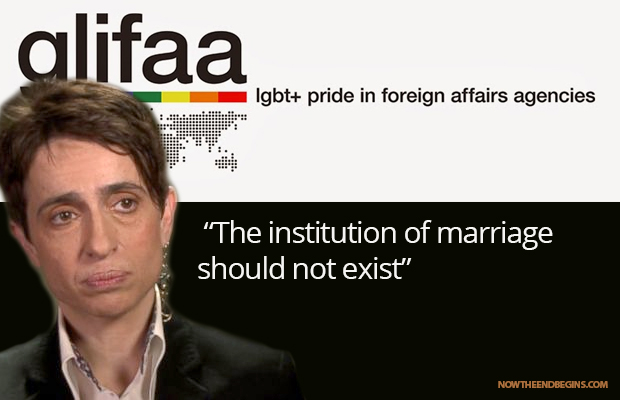 “And Adam said, This is now bone of my bones, and flesh of my flesh: she shall be called Woman, because she was taken out of Man. Therefore shall a man leave his father and his mother, and shall cleave unto his wife: and they shall be one flesh.” Genesis 2:23,24

One of the greatest aims of the Obama administration has been the creation of a rabidly pro-homosexual America, and towards that end he has been frighteningly successful. His influence has opened the floodgates for the enshrinement of LGBT values to the exclusion of the traditional heterosexual construct.

CLICK TO SEE WHAT ELSE THE LGBT MAFIA IS UP TO

Obama’s State Department, no longer concerned with any kind of actual foreign policy, is now focusing on events like it’s annual Gays and Lesbians in Foreign Affairs Agencies Pride Day. At this year’s event, one of the keynote speakers was Masha Gessen, noted LGBT Mafia spokesman. Gessen is not simply an advocate for queer marriage, she states that the true aim of the LGBT Mafia is the removal of marriage altogether. She said this at the Sydney Writers Festival in 2012:

This is the true intent of the LGBT Mafia, and of Barack Obama, with their relentless push to force queer values on America. Marriage is an institution ordained by God Himself in the book of Genesis. One man, one woman, that is what marriage is. This attack on marriage is a spiritual attack, led by the Devil himself, and that’s what makes it all the more terrifying. Barack Obama hates heterosexual marriage, and in the spirit of Antichrist is doing everything he can do to cripple it.

By the time Obama leaves office, if he ever does, the damage he will have inflicted on this nation will be irreversible. No president who would come after him will take the time to undo what has been done. It’s just too much to clean up.

America has fallen, and she can’t get up.