US Forces Massing On Afghanistan-Pakistan Border

US forces are massing on the Pakistan border in eastern Afghanistan amid reports of an imminent drone missile offensive against fighters from the feared Haqqani Network, a Taliban faction... 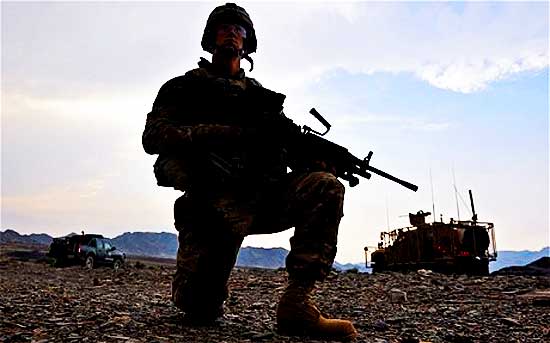 A US soldier stands guard in the Turkham Nangarhar region of Afghanistan, which borders Pakistan Photo: AFP/GETTY
by Geoffrey Grider October 18, 2011
NOW THE END BEGINS SHARE:

War, wars, and rumors of war

US forces are massing on the Pakistan border in eastern Afghanistan amid reports of an imminent drone missile offensive against fighters from the feared Haqqani Network, a Taliban faction which operates from safe havens in Pakistan’s North Waziristan Agency, Pakistan Army sources have confirmed.

A US soldier stands guard in the Turkham Nangarhar region of Afghanistan, which borders Pakistan Photo: AFP/GETTY

The scale of the American build-up, including helicopter gunships, heavy artillery and hundreds of American and Afghan troops, caused panic in north Waziristan where tribal militias who feared they could be targeted gathered in the capital Miranshah to coordinate their response.

Local officials in the Federally-Administered Tribal Areas (FATA) warned that Pakistan’s armed forces would repel any incursion across the border by American forces, but military sources in Islamabad and Afghan officials suggested the build-up was part of a coordinated operation.

Relations between Washington and Islamabad have deteriorated dramatically in recent months as American officials increased pressure on Pakistan to launch an offensive against the Haqqani Network, which mounts attacks on Nato forces in Afghanistan from bases in North Waziristan.

Islamabad has fiercely resisted American pressure, claiming its forces are overstretched and stating its priority is to fight Taliban factions which have declared war on Pakistan, rather than those, like the Haqqanis, who focus on cross-border attacks on Nato forces.

Last month Admiral Mike Mullen, the chairman of the U.S Joint Chiefs of Staff, recently accused Pakistan’s ISI intelligence service of plotting the attack on the US embassy in Kabul with Haqqani network fighters and claimed the militant group was a “veritable arm” of the ISI.

Islamabad and Washington have traded accusations since then, but the massing of American troops on the Afghan border appears to suggest some understanding may have been reached.

According to Pakistan Army sources, the U.S had informed Islamabad about the planned build-up and described it as part of a “cordon and search operation” in which Haqqani Network fighters will be pushed over the Afghan border from North Waziristan and then “encircled, arrested or killed” by American forces lying in wait.

A spokesman for the International Security Assistance Force (ISAF) in Kabul declined to comment on the build-up. A spokesman for the Pakistan Army said it had not been informed about the number of American troops on the border but it was reported that American and Afghan troops had established curfews in eastern Khost province, conducted house to house searches, established checkpoints and occupied hilltops close to Ghulam Khan on the Pakistan side of the border.

The Haqqani Network and militant allies have increased in strength on both sides of the border over the last two years and have been blamed for a summer increase in cross-border raids on Nato positions in eastern Afghanistan. source – Telegraph UK