The Pentagon is building a missile defense radar station at a covert location in Qatar, The Wall Street Journal reported Tuesday. The site will be part of a system... 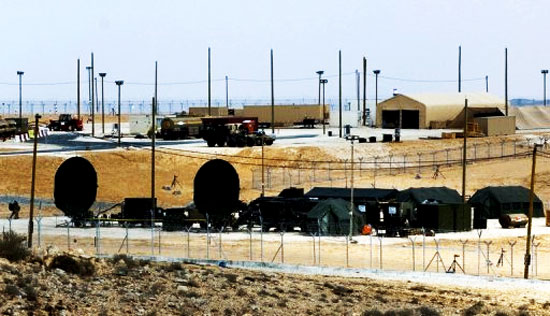 The Pentagon is building a missile defense radar station at a covert location in Qatar, The Wall Street Journal reported Tuesday. The site will be part of a system intended to defend the interests of the United States and its allies against Iranian rockets, unnamed US officials told the newspaper.

The Journal also reported that Washington was preparing for its biggest-ever minesweeping exercises in the Gulf in September, calling them the “first such multilateral drills in the region.”

A similar radar has existed on Mount Keren in the Negev Desert since 2008 and another is installed in Turkey as part of NATO’s missile defense shield.

In addition, officials told the Journal that US Central Command, which oversees US military operations in the Middle East and South Asia, wants to deploy the first Terminal High Altitude Area Defense (THAAD) missile system in the area in the coming months, possibly in the United Arab Emirates.

Tensions with Iran — which Western powers suspect of secretly striving to build nuclear weapons — are rife in the Gulf region.

An Indian fisherman was killed and three others wounded on Monday when a US navy ship opened fire on their vessel near the United Arab Emirates port of Jebel Ali in the southern Gulf.

US defense officials said the fishing boat had ignored warnings not to approach the refueling ship USNS Rappahannock, and that sailors on board the American vessel feared it could pose a threat.

The United States has warned Teheran about blocking the strategically important Strait of Hormuz, and has significantly bolstered its military presence there.

Fears of a closure of the strait — through which about a fifth of the world’s traded oil passes — intensified earlier this year after Iran threatened to close it if Western governments kept up efforts to rein in Tehran’s controversial nuclear program by choking off its oil exports.

Tehran says its nuclear activities are for peaceful purposes only. The United States is trying to prevent military action by Israel against Iran.

In Israel on Monday, Secretary of State Hillary Clinton said Washington would use “all elements of its power” to prevent Iran going nuclear and was working in “close consultation” with Israel over how to do so.

Defense Secretary Leon Panetta is also expected to visit Israel in the coming weeks, according to the Pentagon. source – Yahoo News