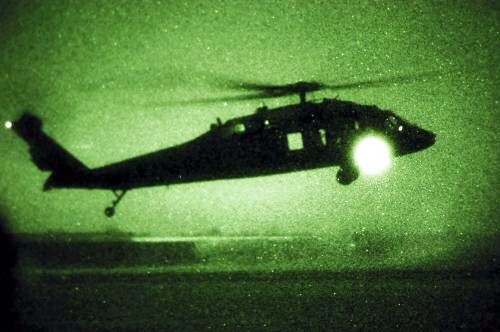 “It was horrendously loud and frightening. There were lights on some of the helicopters that just really upset us,” she said.

Kidd went to Joint Base Lewis-McChord demanding answers. Why didn’t the Army notify city officials of the late-night training mission? Thundering choppers shook residents, awakened children and startled animals in the Olympic Peninsula city about 80 miles northwest of the army base in Western Washington.

The mayor met for an hour with the base commander, Col. H. Charles Hodges Jr., and two officers with the 160th Special Operations Aviation Regiment, she said. “They listened to me and heard our concerns,” she said Monday afternoon. “They apologized and they said they are going to do everything possible for it not to happen again.

“That’s what I needed to hear,” Kidd said.

In addition, Hodges agreed to attend the Tuesday night city council meeting to apologize in person to council members and the public, she said.

Kidd was one of the people awakened by the exercise.

“We have a Coast Guard base and know what our Coast Guard helicopters sound like,” she said. “I’ve never heard anything like that.”

“It was horrendously loud and frightening. There were lights on some of the helicopters that just really upset us,” she said.

Dispatchers didn’t have anything to tell them. The Clallam County sheriff’s office didn’t find out until later Friday that the copters from Lewis-McChord were training at the Coast Guard base at Ediz Hook, on the Strait of Juan de Fuca.

“There was evidently some miscalculation about the noise and disruption it would cause,” Kidd said.

The 160th Special Operations Aviation Regiment, known as the Night Stalkers, is recognized for proficiency in nighttime operations, its website says.

“They are highly trained and ready to accomplish the very toughest missions in all environments, anywhere in the world, day or night, with unparalleled precision. They employ highly modified Chinook, Black Hawk and assault and attack configurations of Little Bird helicopters,” the website says.

Landing lights may have shined on homes, Hodges told the Peninsula Daily News, but the copters weren’t hovering over the city.

The Department of Defense had announced through the Federal Aviation Administration’s Notices to Airmen that there would be heavy military activity in the vicinity of Port Angeles., said Cmdr. Craig O’Brien, operations officer at the Coast Guard base.

Such notices are not sent out to the media or local law enforcement, but the system is accessible to the general public, he told the newspaper.

The Coast Guard has already apologized to the city, Kidd said Monday. And the Army is well on its way to making amends.

“Port Angeles is very patriotic town. We support our military,” she said. “This incident we felt was inappropriate.”

She was assured no further military exercises are planned in Port Angeles in the near future, “for which I am very grateful,” Kidd said. source – CBS Seattle