Several dozen U.S. Army active duty and reserve troops were told last week that the American Family Association, a well-respected Christian ministry, should be classified as a domestic hate... 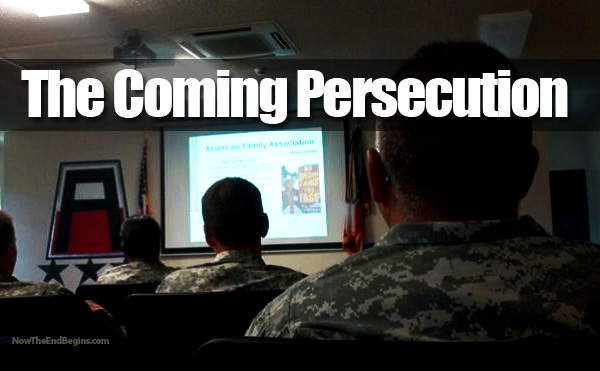 “We do not consider ourselves a Christian nation.” – Barack Hussein Obama

One of the many fruits of having a pro-Muslim, anti-Christian president is persecution, as we are starting to see now flowing out from the dictates of the Obama administration. Obama has been working furiously behind the scenes to drive out of the military any service man or woman who say that they are a Christian. This attitude has worked its way through all levels and branches of the United States military, as you can see in this article.

If Obama is allowed to continue unchecked, arrests of street preachers and bible preaching pastors will soon follow suit. America is indeed at war, but this time it’s with itself. And because the American Christian church – the last days Laodicean church – is sound asleep, Obama will probably win this battle.

From Todd Starnes/Fox News: Several dozen U.S. Army active duty and reserve troops were told last week that the American Family Association, a well-respected Christian ministry, should be classified as a domestic hate group because the group advocates for traditional family values.

The briefing was held at Camp Shelby in Mississippi and listed the AFA alongside domestic hate groups like the Ku Klux Klan, Neo-Nazis, the Black Panthers and the Nation of Islam.

A soldier who attended the briefing contacted me and sent me a photograph of a slide show presentation that listed AFA as a domestic hate group. Under the AFA headline is a photograph of Westboro Baptist Church preacher Fred Phelps holding a sign reading “No special law for f***.”

American Family Association has absolutely no affiliation with the controversial church group known for picketing the funerals of American servicemembers.

“I had to show Americans what our soldiers are now being taught,” said the soldier who asked not to be identified. “I couldn’t just let this one pass.”

The soldier said a chaplain interrupted the briefing and challenged the instructor’s assertion that AFA is a hate group.

“The instructor said AFA could be considered a hate group because they don’t like gays,” the soldier told me. “The slide was talking about how AFA refers to gays as sinners and heathens and derogatory terms.”

The soldier, who is an evangelical Christian, said the chaplain defended the Christian ministry.

Later in the briefing, the soldiers were reportedly told that they could face punishment for participating in organizations that are considered hate groups.

That considered, the soldier contacted me because he is a financial contributor to the AFA ministry.

“I donate to AFA as often as I can,” he said. “Am I going to be punished? I listen to American Family Radio all day. If they hear it on my radio, will I be faced with a Uniformed Code of Military Justice charge?”

The soldier said he was “completely taken back by this blatant attack not only on the AFA but Christians and our beliefs.”

It’s not the first time the Army has accused conservative Christian groups of being domestic hate groups.

Earlier this year, I exposed Army briefings that classified evangelical Christians and Catholics as examples of religious extremism.

Another briefing told officers to pay close attention to troops who supported groups like AFA and the Family Research Council.

One officer said the two Christian ministries did not “share our Army Values.”

“When we see behaviors that are inconsistent with Army Values – don’t just walk by – do the right thing and address the concern before it becomes a problem,” the officer wrote in an email to his subordinates.

At the time the military assured me those briefings were isolated incidents and did not reflect official Army policy.

If that’s true, how do they explain what happened at Camp Shelby?

I contacted the Pentagon for an answer but they referred me to Army public affairs. And so far – they haven’t returned my calls.

And their claim that the classifications are “isolated” is not washing with AFA.

“The American Family Association has received numerous accounts of military installations as well as law enforcement agencies using a list compiled by the Southern Poverty Law Center, which wrongfully identifies and defames AFA,” reads a statement they sent me.

“This mischaracterization of AFA is reprehensible and inexcusable,” he told me. “We have many military members who are a part of the AFA network who know these accusations are a tissue of lies.”

Fischer said their views on gay marriage and homosexuality are not hate – it’s simply a disagreement.

“If our military wasn’t headed by a commander-in-chief who is hostile to Christian faith, these allegations would be laughed off every military base in the world,” he said.

Hiram Sasser, of the Liberty Institute, told me the Army’s briefing is a smear. He recalled what President Obama said last year when Muslim extremists attacked our diplomatic outpost in Libya.

“Since our founding, the United States has been a nation that respects all faiths,” President Obama said. “We reject all efforts to denigrate the religious beliefs of others.”

Sasser said he wished the president and the Army would treat the American Family Association with the same deference and respect they show those who mean to harm us.

“Why must the Army under this administration continue to attack Americans of faith and smear them?” Sasser wondered.

I fear the answer to that question.

Because it appears the Obama administration is separating the military from the American people – and planting seeds of doubt about Christians and some of our nation’s most prominent Christian ministries. source – Fox News