US Navy Commander Adm. Jonathan Greenert said preparations for a clash in the Strait of Hormuz (between the US and Iran) were keeping him up at night. The US... 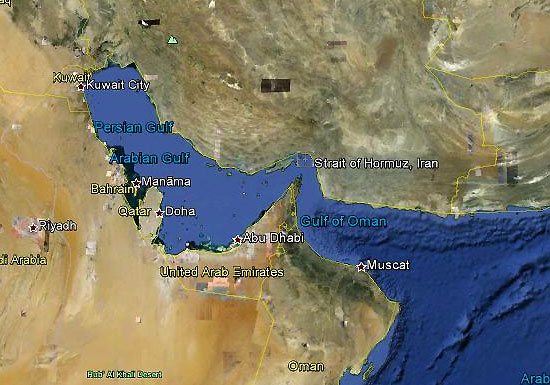 The Strait of Hormuz in the Persian Gulf is what the battle will be fought over
by Geoffrey Grider January 11, 2012
NOW THE END BEGINS SHARE:

The White House is bending over backwards to convince the skeptical Saudis that the president  is wiling to use military force to keep the vital waterway open, safeguard Gulf oil installations and exports and also prevent Iran from acquiring a nuclear weapon. The armed forces chiefs’ disclosures were integral to the White House effort.

US Navy Commander Adm. Jonathan Greenert said preparations for a clash in the Strait of Hormuz (between the US and Iran) were keeping him up at night. The US Admiral added: “If you’re asking me why I’m not sleeping at night, it’s because of the Strait of Hormuz and what’s happening in the Arabian (Persian) Gulf. I’m an organizer, a trainer and equipper. I’d make sure that our people have the right equipment to do the right thing. Our folks that transit in and around that area, I want to make sure that they’re able to (deal) with the things that they need to deal with, basically self-protection, counter-swarm, ASW-anti-submarine warfare.”

Air Force Commander General Norton Schwartz said that the US air force will obviously play a role in keeping the Strait of Hormuz open.

A few days earlier, on Jan. 8, Gen. Martin Dempsey, Chairman of the Joint US Chiefs of Staff, acknowledged that Iran could close the Strait of Hormuz for a period of time, but that if it did so the US would take action to reopen the Strait.

The US has therefore made clear that it is resolved to bring all its naval and air power to bear on ensuring that the Strait of Hormuz remains open.

Riyadh, for its part, has promised to make up any shortfalls in oil sales generated by Western sanctions against Iran as its contribution to Washington’s campaign to convince Asian buyers such as India, Japan, China and South Korea to cut down on their purchases from Iran.

This pledge is not entirely plain sailing. It raises the question of how quickly Saudi Arabia can up its oil production. The expert assessment is six to nine months at least. Then there is the counter-threat from Tehran: If the US continues to lean on European and Asian governments for an embargo on Iranian oil, “not a single drop” of Saudi or Gulf oil will pass through the Strait of Hormuz, say Iranian officials, thus pitting an Iranian blockade against a Western-led oil embargo.

Many Western experts treat Tehran’s threat as empty rhetoric arguing that closure of the vital strait would above all impact Iran’s own oil exports and slash its main source of revenue.

But debkafile’s Iranian sources report that Tehran is thinking in terms of a partial and selective closure of the Strait of Hormuz – rather than full-blown military action – in the certainty that the US and West will not  attack Iranian oil tankers or even detain them. Partial action, the Iranians believe, will be enough to trigger a major spike in world oil prices, send insurance rates for oil tankers sky high and bring the world’s energy markets under intolerable pressure.

Two years ago, a Revolutionary Guards speedboat from the island of Abu Musa in the northern outlet of Hormuz damaged the Japanese oil tanker Star M carrying oil from Saudi Arabia by firing a single missile.

Washington opted to keep the findings of its inquiry under wraps so as to keep down tensions around the Gulf export route, avoid exacerbating relations with Tehran and keep a cap on oil prices. source – DEBKA