DUBAI, United Arab Emirates – Thousands of protesters poured into a main square in Bahrain's capital Tuesday in an Egypt-style rebellion that sharply escalated pressure on authorities as the... 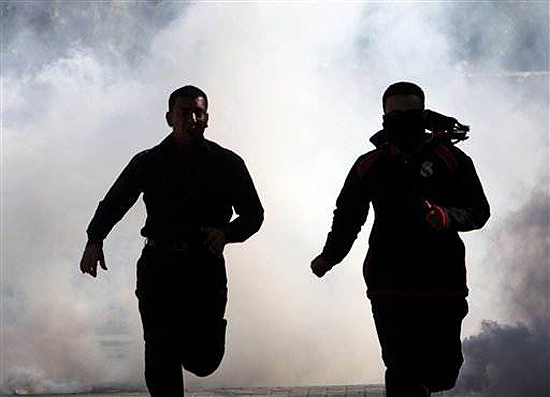 And then there were four…

Tunisia, Lebanon, Egypt…and now Bahrain in the UAE. The Muslim Brotherhood is working overtime these days, that’s for sure.

Bahraini demonstrators run from tear gas Monday, as riot police disperse a protest in the village of Duraz, Bahrain, outside the capital of Manama. - MSNBC

DUBAI, United Arab Emirates – Thousands of protesters poured into a main square in Bahrain’s capital Tuesday in an Egypt-style rebellion that sharply escalated pressure on authorities as the Arab push for change gripped the Gulf for the first time. Security forces have battled demonstrators over two days, leading to the deaths of two protesters. In a clear sign of concern over the widening crisis, Bahrain’s King Hamad bin Isa Al Khalifa made a rare national TV address, offering condolences for the deaths, pledging an investigation into the killings, and promising to push ahead with reforms, which include loosening state controls on the media and Internet.

As the crowds surged into Pearl Square in the capital of Manama, security forces appeared to hold back. The dramatic move Tuesday comes just hours after a second protester died in clashes with police in the strategic island kingdom, which is home to the U.S. Navy’s 5th Fleet. Oppositions groups are calling for greater political freedom and an end to the ruling Sunni monarchy’s grip on key decisions and government posts. The nation’s majority Shiites have long complained of discrimination. Many in the square_ which was quickly renamed the “Nation’s Square” by protesters — waved Bahraini flags and chanted: “No Sunnis, no Shiites. We are all Bahrainis.” Bahrain is one of the most politically volatile nations in the Middle East’s wealthiest corner. A prolonged showdown could draw in the region’s two biggest rivals: Saudi Arabia, as close allies of Bahrain’s Sunni monarchy, and Iran, whose hard-liners have spoken in support of the nation’s Shiite majority. source – Yahoo News