During Obama's time in office, 14.7 million people were added to the food stamp rolls. Over that same time, only 194,000 jobs were created—thus 76 people went on food... 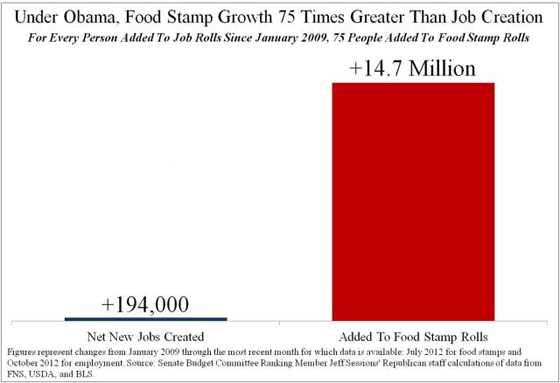 With the latest jobs report, it is now the case that “Under Obama, Food Stamp Growth Is 75 Times Greater Than Job Creation,” according to statistics compiled by the Republican side of the Senate Budget Committee. “For Every Person Added to Jobs Rolls Since January 2009, 75 People Added To Food Stamp Rolls.”

Here’s a chart detailing the growth:

“Simply put, the President’s policies have not produced jobs. During his time in office, 14.7 million people were added to the food stamp rolls. Over that same time, only 194,000 jobs were created—thus 76 people went on food stamps for every one that found a job,” says Senator Jeff Sessions, ranking member of the Senate Budget Committee. “This is a product of low growth. Post-recession economic growth in 2010 was 2.4%, and dropped in 2011 to 1.8%. This year it has dropped again to 1.77%. Few, if any, net jobs will be created with growth of less than 2%.”

The Republicans on the Senate Budget Committee put the job growth into perspective:

In January 2009, there were 133.56 million Americans with jobs and 31.98 million on food stamps. Today, there are 133.76 million Americans with jobs and 46.68 million on food stamps. The employment rolls have thus grown by 0.15 percent and the food stamp rolls have grown by 46 percent, meaning that for every one American who found a job, 75 Americans signed up for food stamps.  Meanwhile, during that time, our nation’s debt has risen $5.63 trillion. Total spending on food stamps is now more than $80 billion annually, a fourfold increase from 2001. Total spending on federal means-tested welfare—food stamps, public housing, social services, cash aid, etc.—is now approximately $1 trillion. That amount is enough, if converted to cash, to send every household beneath the federal poverty line an annual check for $60,000.

Welfare spending is projected to remain permanently elevated; for instance, at no point in the next 10 years will fewer than 1 in 9 Americans be on food stamps. In fact, the Administration has actively sought to boost food stamp spending and enrollment, including through a partnership with the Mexican government to advertise benefits to foreign nationals, as well as materials that teach outreach workers how to “overcome the word ‘No.’” USDA even goes so far as to argue that the program is “the most direct stimulus you can get.”

Overall, in the last four years, the United States’ gross federal debt has increased 53 percent, food stamp enrollment has increased 46 percent, and the number of employed persons has increased just 0.15 percent. This picture, however, is even more ominous than it looks. While only 194,000 net jobs have been created since 2009, the working age population has increased by approximately 5 million—almost 25 times that amount. In other words, a shrinking share of working age adults have or are even looking for a job. The real unemployment number (U-6), therefore, is 14.6 percent.

To put this month’s job creation in historical perspective, in October of 1984, 286,000 jobs were created—67 percent more—at a time when the U.S. working age population was 26 percent smaller than it is today.

Over time, these trends, if not reversed, spell economic disaster for the United States and its citizens. source- Weekly Standard