UN To Create The Ministry Of Mother Earth

Bolivia will this month table a draft United Nations treaty giving "Mother Earth" the same rights as humans — having just passed a domestic law that does the same... 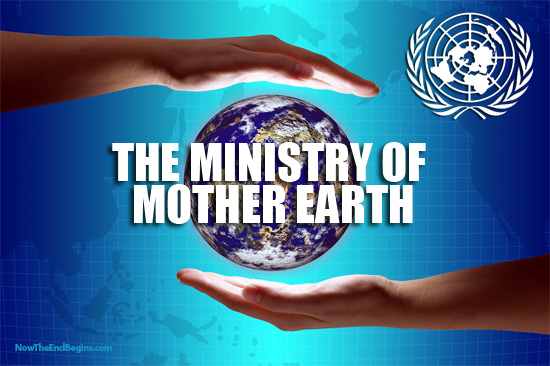 You really can’t make this stuff up

How close to the end of things are we? Read and find out. If this goes through, the creation of a full-fledged New World Order will be only a scant few years away at best. And in case you’re wondering, this is what the bible is talking about when it says this: “Professing themselves to be wise, they became fools, And changed the glory of the uncorruptible God into an image made like to corruptible man, and to birds, and fourfooted beasts, and creeping things. Wherefore God also gave them up to uncleanness through the lusts of their own hearts, to dishonour their own bodies between themselves: Who changed the truth of God into a lie, and worshipped and served the creature more than the Creator, who is blessed for ever. Amen.” Romans 1:22-25

UNITED NATIONS — Bolivia will this month table a draft United Nations treaty giving “Mother Earth” the same rights as humans — having just passed a domestic law that does the same for bugs, trees and all other natural things in the South American country.

The bid aims to have the UN recognize the Earth as a living entity that humans have sought to “dominate and exploit” — to the point that the “well-being and existence of many beings” is now threatened. The wording may yet evolve, but the general structure is meant to mirror Bolivia’s Law of the Rights of Mother Earth, which Bolivian President Evo Morales enacted in January. That document speaks of the country’s natural resources as “blessings,” and grants the Earth a series of specific rights that include rights to life, water and clean air; the right to repair livelihoods affected by human activities; and the right to be free from pollution.

It also establishes a Ministry of Mother Earth, and provides the planet with an ombudsman whose job is to hear nature’s complaints as voiced by activist and other groups, including the state. “If you want to have balance, and you think that the only (entities) who have rights are humans or companies, then how can you reach balance?” Pablo Salon, Bolivia’s ambassador to the UN, told Postmedia News. “But if you recognize that nature too has rights, and (if you provide) legal forms to protect and preserve those rights, then you can achieve balance.”

The application of the law appears destined to pose new challenges for companies operating in the country, which is rich in natural resources, including natural gas and lithium, but remains one of the poorest in Latin America.” source – Canada.com