"No one should live below a certain income level," stated Milos Koterec, President of the Economic and Social Council of the United Nations. "Everyone should be able to access... 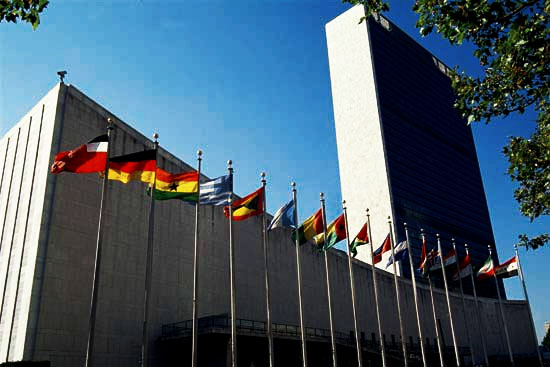 “And it came to pass in those days, that there went out a decree from Caesar Augustus, that all the world should be taxed.” Luke 2:1

One of the things that the bible says will be part of the last days will be a global, one world government, and what comes with that? A world tax.

NEW YORK — Outside the United Nations headquarters, hundreds of people were shouting and waving banners Tuesday that read “China and Russia – No Veto.” These people wanted support from the Security Council of the U.N. to oust the President of Syria, Bashar al-Assad.

Inside the U.N., another group of civil society leaders demanded a basic level of social security as they promoted a “social protection floor” at a preparatory forum for the Commission on Social Development, which began Feb. 1.

The focus of the forum was “universal access to basic social protection and social services.”

“No one should live below a certain income level,” stated Milos Koterec, President of the Economic and Social Council of the United Nations. “Everyone should be able to access at least basic health services, primary education, housing, water, sanitation and other essential services.”

These services were presented at the forum as basic human rights equal to the rights of “life, liberty and the pursuit of happiness.”

The money to fund these services may come from a new world tax.

“We will need a modest but long-term way to finance this transformation,” stated Jens Wandel, Deputy Director of the United Nations Development Program. “One idea which we could consider is a minimal financial transaction tax (of .005 percent). This will create $40 billion in revenue.”

“It is absolutely essential to establish controls on capital movements and financial speculation,” said Ambassador Jorge Valero, the current Chairman of the Commission on Social Development. He called for “progressive policies of taxation” that would require “those who earn more to pay more taxes.”

Valero’s speech to the forum focused on capitalism as the source of the world financial problems.

When asked where she expected the money to provide all needy people with a basic income, healthcare, education and housing would come from, Fatima Rodrigo, one of the presenters at the forum, mentioned the “very small tax of .005 percent.”

She added, “There is plenty of money, we just need to stop spending it on militaries and wars.” source – Deseret News