Ukraine said on Friday it had destroyed part of a Russian military convoy that entered onto its territory in an incursion that has sent cross-border tensions rocketing.... 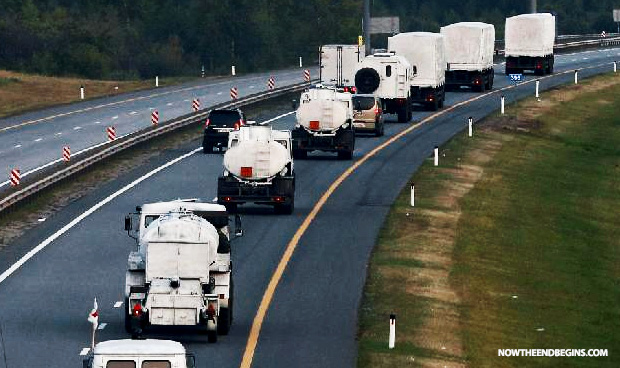 Moscow's defence ministry dismissed the alleged convoy as a "phantom", its latest denial of Western accusations that it is funnelling weapons to the pro-Russia separatists who launched an insurgency against Kiev in April.
by Geoffrey Grider August 15, 2014
NOW THE END BEGINS SHARE:

Ukraine shows some fight as blow is struck against Russia

Kiev (AFP) – Ukraine said on Friday it had destroyed part of a Russian military convoy that entered onto its territory in an incursion that has sent cross-border tensions rocketing. NATO accused Russia of active involvement in the “destabilisation” of eastern Ukraine, where pro-Kremlin separatists have been fighting against Kiev for four months.

Moscow’s defence ministry dismissed the alleged convoy as a “phantom”, its latest denial of Western accusations that it is funneling weapons to the pro-Russia separatists who launched an insurgency against Kiev in April.

The two countries have also been wrangling for days over a Russian convoy that Moscow says is carrying humanitarian aid for besieged rebel-held cities but which Kiev suspects could be a “Trojan horse” to provide military help to the insurgents.

Fears that the border clash could spill into all-out war between Kiev and Moscow sent major share markets tumbling across Europe and the United States.

Ukrainian President Petro Poroshenko told British Prime Minister David Cameron that government artillery had destroyed a “considerable part” of a small military convoy that entered the country, the presidency said in a statement.

The European Union demanded that Russia “put an immediate stop to any form of border hostilities, in particular to the flow of arms, military advisers and armed personnel into the conflict region, and to withdraw its forces from the border.”

French President Francois Hollande called on Russia to respect Ukraine’s territorial integrity and for both sides to try to de-escalate the “very high tensions,” while Britain summoned Moscow’s ambassador to “clarify” the situation and a Cameron spokesman said Russia needs to show “a willingness to find a peaceful solution to the conflict”.