Britain could send military reinforcements to the Gulf in the escalating confrontation with Iran, the Defence Secretary said yesterday as the Tehran regime declared it would "defend the nation"... 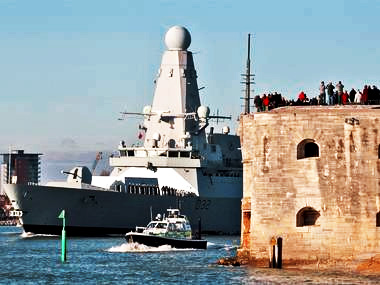 HMS Daring, which left Portsmouth for Suez this month, could be diverted to the Gulf - Getty Images
by Geoffrey Grider January 25, 2012
NOW THE END BEGINS SHARE:

How far will Iran take it?

Britain could send military reinforcements to the Gulf in the escalating confrontation with Iran, the Defence Secretary said yesterday as the Tehran regime declared it would “defend the nation” against the threat posed by an EU oil embargo.

HMS Daring, which left Portsmouth for Suez this month, could be diverted to the Gulf - Getty Images

Philip Hammond said contingency plans were in place to send extra warships, aircraft and troops to the region if it became necessary. He said the decision to send a flotilla led by the American aircraft carrier USS Abraham Lincoln through the Strait of Hormuz – which Iran had threatened to block – sent “a clear signal about the resolve of the international community to defend the right of free passage through international waters.”

A British frigate, HMS Argyll, and a French warship were part of the convoy, which sailed within a few miles of the Iranian coast. The UK has about 1,500 naval personnel in the Indian Ocean serving on four minesweepers, two frigates, three support ships, a survey vessel and a hunter-killer submarine. A Response Force Task Group of Royal Marines, helicopters and naval vessels set up last year could also be deployed at short notice.

HMS Daring, a destroyer with specialist air-defence capabilities, is already sailing toward Suez on a six-month mission against piracy and drug smuggling and could be diverted in an emergency. HMS Westminster, a frigate used during the Libya campaign last summer, left Portsmouth in southern England on Monday and could reach Hormuz within a week.

The French frigate, La Motte Picquet, which took part in the Hormuz exercise, had departed and there were no plans for further forces to be sent, a spokesman at the Defence Ministry in Paris, Colonel Thierry Burkhard, said yesterday. But he stressed that an infantry battalion of about 650 troops and six Rafale fighter-bombers based in the United Arab Emirates would be available if hostilities break out.

The US has augmented its 5th Fleet at Manama Bay in Bahrain with a second aircraft-carrier, USS Carl Vinson, joining USS Abraham Lincoln. The Pentagon said the enhanced presence would continue and is considered to be adequate for whatever mission is required.

There has been no discernible Iranian military reaction to the Western manoeuvres. Yesterday, the Danish ambassador was summoned to the Foreign Ministry in Tehran to be told of President Mahmoud Ahmadinejad’s displeasure with the sanctions, which are intended to pressure Tehran into resuming talks on the country’s controversial nuclear program.

A senior official of the Oil Ministry, Alireza Nikzad Rahbar, said the embargo may end up by helping Tehran by creating a shortage in supplies. “Europe will be the loser and we will earn more because of high prices,” he said. source – Independent UK